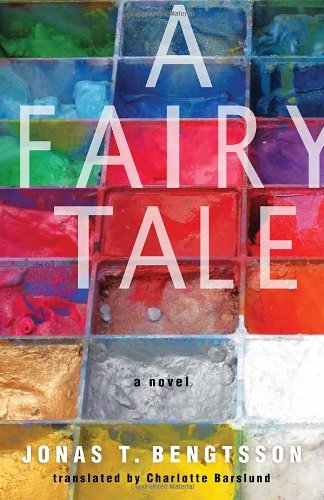 1.
Jonas T. Bengtsson’s A Fairy Tale — his third novel, but the first available in English — begins as a chronicle of an unusual upbringing. A small boy is being raised by his father in Denmark, and for reasons that are initially unclear, the father keeps them moving from town to town. Early on, the boy is transported through the streets of Copenhagen in the front basket of his father’s bicycle:

My dad stands up in the pedals; I can see his head above me.
“What, then, extraordinary stranger, do you love?” he says and looks down at me.
I know what to reply. “I love the clouds — the clouds that pass — yonder — the marvelous clouds.”

They’re speaking lines from “The Stranger,” a poem by Charles Baudelaire that takes the form of a brief conversation. The poem begins: “Tell me, enigmatic man, whom do you love best? Your father, your mother, your sister, or your brother?” and progresses through a series of questions and negations. The stranger replies: he has no parents, no siblings, no friends. Does he love his country, then? No, he is “ignorant of the latitude in which it is situated.” He hates gold and God in equal measure. But he does love beauty, “goddess and immortal,” and the clouds. Beauty and freedom. He’s essentially untethered from human society.

The problem, of course, is that while the boy knows the stranger’s responses by heart, the responses express sentiments that belong to his father, not to him. The boy’s being carried along in his father’s strange life. His father is committed to living outside of mainstream society. He works odd jobs and keeps his son out of school. There are early intimations that the father’s grip on reality is shaky, but he’s genuinely kind and an attentive parent. The boy — we never learn his real name, but let’s call him Peter, which is a name he uses occasionally — knows that they’ll always keep moving, but he knows also that his father will never leave him behind. There are moments of transcendent beauty and joy. Bengttson’s prose is clear and unadorned, and he strikes a fine balance between momentum and careful character development.

Every night my dad tells me a little more of the same fairy tale.
The story of the King and the Prince who no longer have a home.
The King and Prince have gone out into the world to find the White Queen and kill her. With an arrow or a knife, a single stab through her heart will lift the curse. They’re the only ones who can do it because the King and the Prince are the last people who can see the world as it truly is. Only they haven’t been blinded by the Queen’s witchcraft.

This uneasy life continues, until catastrophe strikes: a young and charismatic politician draws the father’s attention. She’s a reform-minded populist, a gifted speaker who appears often in the press. Peter’s father goes from interest to obsession to setting out for the capitol building with a knife. He has found the White Queen.

Who will you become? It’s an intriguing question, both in coming-of-age novels and in life. To me, one of the darkest and most interesting aspects of Donna Tartt’s The Goldfinch was the slow drift whereby the half-orphaned Theo, unloved and longing for his lost mother, starts to resemble his shady and unreliable father instead. Laura van den Berg sums up the problem beautifully in “Lessons, a short story included in her recent collection The Isle of Youth. The story concerns four teenaged cousins, who have left their survivalist pentecostal parents in the isolated Midwestern settlement of Elijah and set out into a new life of armed robbery:

At first Dana thought leaving Elijah meant getting away from how things were on the farm, but now she thinks the past is like the hand of God, or what she imagines the hand of God would be like if God were real: it can turn you in directions you don’t want to be turned in.

A Fairy Tale is a fascinating and often brutal meditation on alienation and trauma. “What separates man from any other species,” Peter’s father told him one evening, before it all came undone, “is his ability to adapt.” But in A Fairy Tale, adaptation is precisely the problem. We see Peter in childhood, adolescence, and adulthood, and it’s clear by the second section that he hasn’t been entirely successful in finding a way to live in the mainstream world. In adolescence and in adulthood, Bengtsson presents him with a cool remove that makes him appear somewhat shell-shocked.

Herein lies the one flaw, in my opinion, in an otherwise virtually flawless novel. The spare coolness of Bengtsson’s prose style is effective, particularly in the almost eerie detachment with which he describes the book’s few moments of overt violence, but this translates at times to a frustrating distance from his narrator. We’re allowed to draw close to Peter in childhood, to glimpse his thoughts and fears, but the adult Peter is something of a cipher, the first-person narration notwithstanding.

By the time we see Peter in adulthood, he’s managed to build a life for himself. But he’s living as a stranger in the world, in a manner eerily reminiscent of his father. He lives under an assumed name and has few ties to society. In Bengtsson’s remarkable novel, past is never entirely behind us.

Reviews
In Hardwick’s criticism, we encounter an uncondescending intelligence, a humane sensibility, and a forthright independence of mind for which we, in our scatterbrained era, cannot be grateful enough.
Reviews
Alex Andriesse | 3 books mentioned 5 min read
● ● ●
Reviews
Though many of the stories have an element of mystery, Sheehy isn’t interested in finding out who did what -- he knows the dramatic cornucopia lies elsewhere, with the living and the mistakes they have to examine in light of the dead.
Reviews
Greg Gerke | 3 books mentioned 1 4 min read
● ● ●
Reviews

As the war in Iraq commenced what seems like ages ago with the frenetic coverage of embedded reporters and the televised firefights, I remember looking forward to reading some of the books that would inevitably come out of this media frenzy. In the nearly two years since there have been many of these books, some good and some bad. I recently read a couple of them. Actually I listened to Naked in Baghdad by NPR correspondent Anne Garrels on the long drive from Chicago to New York. The audiobook is read by Garrels and her husband Vint Lawrence. Garrels’ strong, familiar voice added a lot to the experience. Though Garrels was one of just a handful of American journalists to stay in Baghdad during the run-up to war, the political and military machinations going on around her are just one element of the book. The meat of the book is devoted to her personal relationships with her fellow journalists, minders, drivers, and the myraid Iraqi officials who spent the regime’s final days collecting bribe money. As an inside look into the harrowing life of a war correspondant, the book is brilliant, filled with menacing bad guys and explosions that are way too close for comfort. But Garrels is at her absolute best as she delves into the backroom politics of the world of the macho foreign correspondant. She revels in the fact that American television left Baghdad before the war, leaving only an old school contingent of print reporters to cover the invasion from the capital. She pulls no puches as she berates CNN’s arrogance and Geraldo Rivera’s foolishness. Her demand is for professionalism over sensationalism.Most journalists were forced by uncertainties in Baghdad to cover the war by embedding with American units as they invaded Iraq. Rick Atkinson was one of these embedded journalists, and his book, In the Company of Soldiers tells the story of his time with the Army’s 101st Airborne Division. Aside from his duties with the Washington Post, Atkinson is also a military historian of some repute (his World War II book An Army at Dawn won a Pulitzer in 2003) and it shows. He is interested most in the tactics employed during the invasion and in the commanders who implemented them. Where Garrels delivers portraits of shady Iraqi bureaucrats and flamboyant European journalists, Atikinson’s narrative is tied to Major General David Petraeus, a no-nonesense military man. The 101st, and Atkinson along with them, saw their share of action during those early days, but much of what transpired during those first weeks feels like a footnote — or ancient history — compared to all that has happened since. The most interesting parts of the book are the most personal. Atkinson’s daily struggles against the harshness of the desert and the austerity of military life shine far more brightly than the methodical movements of the troops he travelled with. Both books take the US to task for fouling up the aftermath of the invasion, but where Garrels’ concerns seem to arise from her daily interactions with Iraqis, Atkinson’s epilogue seems hastily tacked on, an attempt to save the book from being made irrelevant by the nasty turn that this war has taken.RELATED: In October I met Anne Garrels, and I met Rick Atkinson in October 2003.