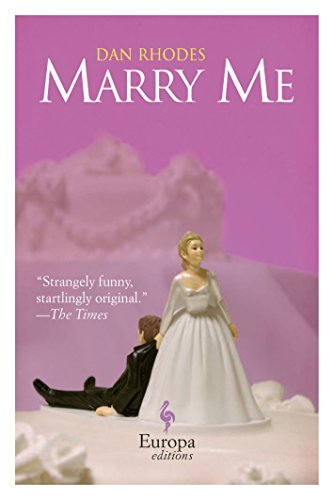 1.
For couples seeking a Valentine’s Day more astringent than saccharine, I suggest the following: settle down after dinner, light some candles, and read Dan Rhodes’s Marry Me aloud to each other. Start with “Fate,” the entirety of which runs as follows:

When it comes to matters of romance, my fiancée is a firm believer in destiny. “If fate has decreed that I end up married to you,” she’ll sigh, “then there’s not much I can do about it, is there?”

If there is some uncomfortable fidgeting, take a slug of red wine, perhaps something stronger. Then flip to “Worst” and read the opening line in your sultriest voice: “My wife told me that she and her friends had voted me the worst at sex out of all their husbands.”

Cough awkwardly and mop your sweating brow if you must. Now you’re primed for the opening story, “Ex,” about a woman who won’t stop talking about her former lover and the “sun-drenched and culturally enlightening holidays they had taken together.” Lying naked in the arms of her new husband on her wedding night, she tells him: “It’s funny — if things had turned out just a little bit differently, it would have been him I’d just done that with, not you.” The story breaks off before we learn whether or not the narrator laughs.

On second thought, what’s playing on TV? Perhaps it’s best to save Marry Me to read in solitude at a later date.

In his latest collection, Rhodes sends out 79 telegraphic dispatches from the land of generally mismatched lovers. (His debut, Anthropology, covered similar terrain while adhering to Oulipo-like constraints: each of the 101 stories had 101 words.) Like the heroine of “Fate,” Rhodes is a believer in destiny. His short tales — usually a paragraph or two — bear the seed of an impending tragedy in even the most innocent of opening clauses. As the love affairs between cloying obsessives, callous monsters, oblivious saps, and determined romantics are narrated one by one, the title Marry Me becomes increasingly ominous. A hint of menace creeps in; the title seems less and less like a question or plea and more like an imperative to submit to Eros and the attendant havoc.

Marry Me’s epigraph is an opaque quote from George Bernard Shaw: “Marriage is the only legal contract which abrogates as between the parties all the laws that safeguard the particular relation to which it refers.” I confess to reading that three or four times, increasingly frustrated at my obtuseness for missing what was obviously an invaluable nugget of truth, before scanning down to a small author’s note at page’s bottom: “I have no idea what this means, but I’m sure it’s very wise.” That earned my first chuckle, but my initial befuddlement could also be thought of as a little allegory of the cluelessness, willful or otherwise, afflicting many of the lovers I’d soon meet.

Marry Me generates its humor from the disconnect between a relationship’s form — its personal, sexual, and social expectations — and that relationship’s unexpected, and often grotesque, content. Reading the scores of first-person stories straight through is a little like watching a long standup act, the comic adopting various roles but maintaining a signature voice throughout. The trick is to condense all those roles into one narrating persona, which can register as boorish, naive, ironic, cloying, poetic, wistful, or blithely cruel. Rhodes’s flat affect stays consistent even as he plays the lovesick fool or the cool ironist; no humiliation or catastrophe ruffles the calm surface of the text, not even in “Fear,” in which a skydiving marriage ceremony goes terribly wrong. When the chutes fail to open and his new wife screams in terror, he realizes it’s never too late for passive aggression: “I’m wondering whether this would be a good moment to remind her that it had been her idea.”

One of the most impressive, bizarre tales is “News,” which in the space of a couple hundred words crams in a lot: a fiancé with cold feet, a tiger mauling, an elaborate mime by a man named Demetrio, and a clinically logical abdication of personal responsibility. To explain how they fit together would ruin the fun. It’s a small wonder of constantly shifting sympathies amidst mounting absurdity.

There are some duds, especially when Rhodes goes for the overtly jokey. In “Issues,” the narrator claims not have any body image issues, prompting his fiancée to tell him that that’s precisely the problem: “Just look at yourself. You’d better get some — and fast.” And in two uncharacteristically stale satires, “Her Old Self” and “Her Self,” Rhodes belabors the nagging harridan trope. However, the virtue of the form is that these misfires (unlike some bad relationships) quickly conclude. Before long, it’s on to the next new conceit.

The best stories, like “Dress,” skillfully build up to their punch lines. Honoring his wife’s final wish to be cremated in her wedding dress, an undertaker informs him with “impeccable politeness” that it won’t be possible. Maintaining his professionalism throughout, the undertaker explains how the deceased’s very short, black leather dress would clog the machine and fill the streets with an acrid odor. Decorum finally gives way in the last line’s perfectly timed eruption: “‘Perhaps,’ he suggested, ‘madam has something in her wardrobe which was comparably whorish, but rather more likely to conform to council regulations?’”

Male anxiety supplies Rhodes with plenty of material. His world is populated by good looking, funny, and virile suitors; they sometimes gather together en masse, perhaps on a parade float (“Champions”) or on the bride’s side of a wedding (“Commitment”). The narrator is repeatedly cuckolded, the betrayals made even worse by the brutal honesty of the confessions: “Do you remember that time you told me I was way out of your league, and how you were worried that one day I would find somebody a lot more handsome than you, and much, much better in bed? Well, now I have.” Others have more tact in breaking things off. In “Mistakes,” a woman asks her new husband to proofread a letter she has written on her honeymoon to a friend; he happily corrects her grammatical and orthographic infelicities: “the most biggest mistake I have ever made;” “it feels like a life sentance [sic];” “I dont [sic] know what I did to deserve this.”

Midway through the collection, a young woman quotes Goethe to her fiancé: “One should only celebrate a happy ending; celebrations at the outset exhaust the joy and energy needed to urge us forward and sustain us in the long struggle.” Though most of Rhodes’s stories focus on that long struggle, several of the strongest tales celebrate a happy ending, or at least his unique take on a happy ending. Particularly memorable is “Perfect,” about a couple whose pricy wedding eventually leads to their eviction and homelessness.

The story pushes past its initial comic conceit to arrive at a hard-fought poignancy reminiscent of Waiting for Godot. As Vladimir thinks back on the respectable days when he and Estragon stood “hand in hand from the top of the Eiffel Tower, among the first,” so does Rhodes’s destitute pair turn their thoughts to happier days: “Now, years later, as we huddle together for warmth under whichever bridge happens to feel the safest, we reminisce about our special day.” Wishing for some boric acid to “keep the cockroaches away,” the smitten, laughing husband listens to his wife, “her eyes bright with memory,” rhapsodize about place settings, the exquisite calligraphy, the exact “shade of orchid” on the corsages and finally Uncle Desmond:

At the reception Uncle Desmond had done an amusing dance with his arms outstretched, as though he were an aeroplane, or a bird or something.

After the loving recall of every precise detail, there is something especially inspired about that concluding uncertainty over Uncle Desmond’s dance, a mystery to ponder until death do them part.