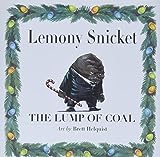 What is not to love about a lump of coal in your Christmas stocking? If it’s Lemony Snicket’s Christmas children’s book for adults The Lump of Coal, I assure you, it is all lovable – even the copyright page (laid out concrete-poetry style in the shape of Christmas tree). The Lump of Coal tells the story of holiday miracles: not the ones you probably know (“the story of a candelabra staying lit for more than a week, or a baby born in a barn without proper medical supervision”), but the story of (you guessed it), a lump of coal, who “like many people who dress in black… was interested in becoming an artist. The lump of coal dreamed of a miracle – that one day it would get to draw rough, black lines on a canvas or, more likely, on a breast of chicken or salmon filet by participating in a barbeque.”

I will hardly spoil the ending by assuring you that these dreams come true – and that the path to them is charmingly illustrated (as were the Series of Unfortunate Events) by Brett Helquist. And that the lump’s adventures are marked by Mr. Snicket’s signature narratorial interruptions of his story for cryptic personal revelations, his idiosyncratic definitions of words possibly not familiar to his audience, and his winning mix of the fantastic and the depressingly mundane. For any of you who know Tim Burton’s The Melancholy Death of Oyster Boy and Other Stories (which includes several Christmas offerings – my favorite, “James,” features a Burton drawing a Santa-suited arm offering a teddy bear to a doubtful looking little boy who has several parallel gashes across one eye; the text reads: “Unwisely, Santa offered a teddy bear to James, unaware that he had been mauled by a grizzly bear earlier that year.”) – The Lump adds another volume to the genre of Edward Gorey-ian cynical, morbid, and eccentric illustrated works that take the form of children’s stories but are really much more for grown ups.

(Oh, yes – and a final note: The Lump of Coal is elusive (which in this case means it likes to hide from employees and shoppers in bookstores). An indefatigable Vroman’s employee did managed to find it for me yesterday, but it hid from him for a good fifteen minutes, and this was the second bookstore I’d been to in search of it. At the first, The Stanford Bookstore, not one of the twenty copies in stock could be found.)

Emily Colette Wilkinson is a staff writer for The Millions living in Virginia. She is a winner of the Virginia Quarterly's Young Reviewers Contest and has a doctorate from Stanford. Her writing has appeared in The Washington Times, In Character, VQR, Arts & Letters Daily, and The Daily Dish.

Reviews
Using the New York City borough of Queens as a linchpin, Jonathan Lethem’s latest novel questions the American twentieth century’s “great comedy: that Communism had never existed, not once. So what was there to oppose?”
Reviews
Buzz Poole | 3 books mentioned 1 4 min read
● ● ●
Reviews
Reviews
What's taken for granted in any first-person novel or memoir is now suddenly missing, and what we get in return is a revelation: a character defined as the reflective surface all others cast themselves onto.
Reviews
Andrew Lipstein | 3 books mentioned 5 min read
● ● ●
Reviews

I’ve read and enjoyed many of E.L. Doctorow’s short stories, typically in the New Yorker, but I’d never had the occasion to read Ragtime, Doctorow’s most famous work, one that has been made into a film and Broadway musical.I don’t know that I’m well read enough to insist that Doctorow invented this sort of quasi-historical book, a work of fiction that necessarily intersects with the notable political and cultural figures of the day, rather than using them as simply a backdrop, but it has certainly become more prevalent in recent years.Back then, apparently, it was new and different. So new and different in fact that my 1976 Bantam paperback edition comes with this quote emblazoned on its back cover:It is a novel so original, so full of imagination and subtle pleasure, that to describe it further would only dilute the pure joy of reading. Turn to the first page. Begin. You will never have read anything like Ragtime before. Nothing quite like it has ever been written before.On the front cover the sentiment is the same, if less verbose. Ragtime is “the astonishing bestseller about America.” 30-plus years later, Ragtime is still a remarkable book, but to today’s reader it likely won’t feel quite as fresh, as “astonishing,” as it may have when it was first published, if only because it has, knowingly or not, been an inspiration for many novels that have followed.Set at the turn of the 20th century, Ragtime traces a few intersecting threads, but the main one involves a family in New Rochelle, New York. Father is the owner of a fireworks and American flag business (“about America” remember) and also an amateur polar explorer; Mother runs the house and is the household’s real source of strength; Mother’s Younger Brother is a quiet dreamer with anarchist tendencies and skills with explosives; the boy, child and nephew of these three, is the window through whom the story is told. The family’s relatively quiet existence is shifted when a baby is discovered buried in the back yard, miraculously still alive. A black baby. In not altogether enlightened New Rochelle this causes something of a stir and sets in motion the arrival of Sarah, the baby boy’s mother, and Coalhouse Walker, his father. This in turn sets in motion further events that eventually, cascading, bring bustling New York City to a standstill. But this center thread is augmented by intimate fictionalized views of notables like Harry Houdini, J.P. Morgan, and Emma Goldman, all of whom peripherally interact with the central family at one point or another.Perhaps because it shares with Ragtime a fascination with Houdini and a polar interlude, Michael Chabon’s The Adventures of Kavalier and Clay, is the recent novel I most associated with Doctorow’s. And indeed the two books seem to inhabit the same gritty New York City, though they are set decades apart. At the same time, however, Kavalier is a more evolved form, crisper and brighter like the comic books Chabon evokes. With Ragtime, Doctorow is more lyrical and wandering, willing to swaddle the central narrative with peripheral stories, willing to leave loose ends untied.Not long ago, in the New York Times and elsewhere, there was much discussion of the “best” novels of the last 25 years. Ragtime, being too old, was ineligible to be bandied about by pundits and bloggers, but, having read it, I can see that it was essential in laying the groundwork for the tone that a certain influential strain of popular literary fiction has taken since then. The hype on the back of my paperback may be overwrought, but clearly Ragtime was something special.