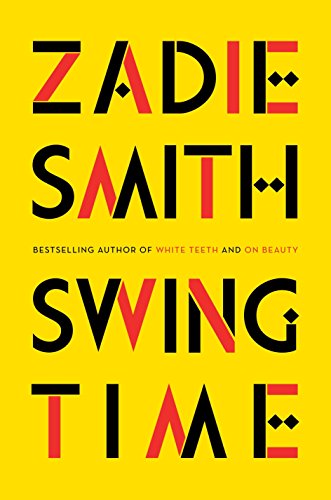 What’s in a name?

Often we approach a novel through a protagonist who has a name. Albert Camus’s stranger had a name though he didn’t have a personality; Fernando Pessoa’s heteronyms had names for their faux autobiographies. Our names serve as our most basic identifiers outside of race and gender — though they may be informed by either or both — and so serve as a sort of grounding for the reader to return to.

This is not the case, however, in Zadie Smith’s Swing Time, in which the protagonist has no name, no signifiers, no grounding, only to be figured out through her relationships, interactions, and circumstances. Our protagonist here is so nebulous she becomes an idea for the reader to grasp at and attempt to put together, like a puzzle made of stardust, but once the reader finishes the puzzle they’re left with a sparkling cloud reminiscent of nothing.

Though this novel makes the quiet narrator our entryway into Smith’s little London (and New York and Gambia and elsewhere), it really revolves around several boisterous characters: Tracy, a charismatic dancer whose life is derailed at a certain point; Aimee, a Madonna archetype bending the populace to her will throughout a long career; and the narrator’s mother, an Afro-Caribbean sociopolitical pundit more concerned with caring for the world than caring for her home.

The narrator’s identity is likewise composed in opposition to the women she at once reveres and resents for their ability to expand in areas she can never quite inhabit. This, albeit an interesting play on readers’ expectations, also serves as the book’s biggest flaw; this nameless character is hard to pin down and, at points, inconsistent with the woman we’ve barely come to know. The closest person whose character resembles hers is her father, also nameless, who serves as her primary caregiver and emotional support until their relationship is shattered through Tracy’s antics.

Tracy plays the largest role in the novel as the narrator’s childhood best friend and eventual foil, ever-present in her life despite the distance, in space and class, the narrator travels. Tracy appears as a woman with a static personality, one that barely changes throughout the pages regardless of where her life leads. Although both girls are biracial and band together in their dance class, Tracy is nearly the narrator’s polar opposite. While the narrator comes from a more-or-less two-parent household, Tracy lives alone with her mother, with occasional visits from an abusive father; while the narrator’s mother is a black academic, Tracy’s mother is a white alleged alcoholic; while the narrator is unfit as a dancer, Tracy naturally shines. The narrator seems to drift along, never really content or at one with herself. Throughout the book she is an honor student, a slacker, a pro-black scholar, a lover, a eunuch, and so on. The only facet of her personality that remains constant is her affinity for singing, which is often undermined by Tracy’s superior dancing. For a large majority of the novel, the narrator exists in juxtaposition to Tracy, yet Tracy dominates every scene she appears in. I get the distinct feeling that this effect was deliberate, but it leaves the narrator almost totally undefined, making it harder for the reader to understand her.

The next domineering figure in the narrator’s life is the Australian pop star Aimee, clearly serving as an avatar for our Madonna, with perhaps a dash of Angelina Jolie. This is, arguably, where the story becomes the most disjointed and disheartening. After a brief stint at YTVc — a sort of MTV/Buzzfeed amalgam — the narrator becomes Aimee’s assistant, remaining so until the final climax of the novel. Smith depicts Aimee through a dim, critical lens that continues to leave me disdainful whenever Madonna posts a new photo on Instagram. Aimee’s personality is not only boisterous but airy and all-encompassing as she makes critical choices based on vague trendy ideas without genuinely asking what it is the people affected by these decisions want or need. She launches a new school for girls (and only girls) on a quasi-feminist whim in a village in an unnamed country that is likely Gambia, instructing her beleaguered project manager Fernando to make it “kind of an illuminated ethos” — a line lifted from one of her albums. She whisks not one but two people from the village away into her life, using money and influence to gather people as accessories to wear or stories to tell. And when she tires of West Africa and philanthropy, she wanders to Silicon Valley to get into the burgeoning tech boom of the millennial age while our nameless narrator and Fernando to keep the school afloat as reality begins to weigh it down.

Smith’s Aimee is the paragon of white celebrity culture occupying black and brown spaces, first in music and dance, and then the very lives of the villagers. Aimee’s presence in Swing Time serves as an allegory for the power of whiteness; it comes, it takes, it leaves, and no one can stop it. This is most evident in these women’s fates, as whiteness and power exercise their bona fides in their lives.

There is also the occasional inclusion of the narrator’s mother, also nameless. Mother’s duties in the novel have more to do with scholarship than motherhood — to the point where she greets the latter with a sort of disdain or callousness. “My own mother’s focus was always elsewhere,” the narrator says. “She could never simply sit somewhere and let time pass, she always had to be learning something.” Mother begins the novel as an autodidact and ends as a member of Parliament, among other things. She arguably undergoes the most tangible growth in the novel, but also the least emotional growth. She and the narrator still keep one another at arm’s length until the very end.

There is not much to say about Mother considering her presence is comparatively lacking, though the narrator appears to harbor the most resentment towards her compared to the other two. Mother also appears to complete the féminin trifecta Smith was going for.

These three women tackle the zeitgeist from different directions. Aimee is the crux of whiteness and wealth, Mother is pro-blackness and all its pitfalls, while Tracy is the age-old stereotype of the rambunctious woman damaged beyond repair by the end. All three of these women represent beauty to the narrator’s plainness, ferocity to the narrator’s meekness, all up until the latter half of the book in which those around her begin to subtly change their actions and reactions towards her and she abruptly changes as a person herself. At one point, a character who’d shown outright contempt towards her in the beginning of the novel falls in love with her. While they spend a considerable amount of time together, we do not witness any fundamental changes to the narrator’s personality or appearance or anything; to us, she’s the same quiet, confused voice serving as our guide through Tracy’s/Aimee’s/Mother’s antics. This change is only a microcosm of Swing Time’s grander flaw: Certain plot points come out of nowhere and are provoked by nothing, leaving the reader a bit disoriented towards the end.

Ultimately, while Swing Time makes admirable artistic choices — who doesn’t love a nonlinear narrative? — the main issue I take with this novel has to do with how these choices don’t mesh well to create the relevant masterpiece it could have been. The whole does not amount to the sum of its parts, in other words. She introduces a character surrounding brown girls in a world reminiscent of our own, but — like the narrator herself — the routes opened throughout the novel don’t go all the places they could.

Kaila Philo is a writer, journalist, and essayist based in Baltimore. She has been published in Mask Magazine, Winter Tangerine, Arts.BLACK, and Hyperallergic. She writes a monthly column for Full Stop Magazine.

Jon Lee Anderson is a top-tier foreign correspondent. Writing for the New Yorker, he has spent much of the current decade reporting in Afghanistan and Iraq. Unlike many of his “embedded” colleagues, however, Anderson strays far from the relative safety of American protection into the homes and offices of people on the ground, talking to people from all walks of life, all the way up to heads of state.But Anderson is at his best when he talks to the little guys who toil in the shadow of war, whether as participants or bystanders. His book Guerrillas is about those little guys. In Guerrillas, Anderson takes an almost anthropological view of five insurgent movements that simmered and raged in far flung corners of the globe: the mujahedin of Afghanistan, the FMLN of El Salvador, the Karen of Burma, the Polisario of Western Sahara, and the Palestinians in the Gaza Strip. The book covers a three year period, December 1988 to January 1992, that Anderson spent traveling around the world, putting time in with those groups. The book is not divided up by geography, as I had expected it would be, but instead Anderson finds themes that are common among guerrilla movements and spends a chapter on each one, beginning with “Creation Myths” and moving on to “Earning a Living” and “Making War,” among others.His point of view is steadfastly observant and unbiased. He chronicles in the same tone the atrocities committed by insurgents and their oppressors. Anderson’s viewpoint is an interesting one, though. He portrays these movements as being in the grip of a sort of madness, for example:In the refugee camps of Gaza, the desert of Western Sahara, the hills of Chalatenago, and the teak forests of Kawthoolei, revolutions are under way, and the guerrillas dwell in separate realities, parallel to those they are rebelling against.This madness, brought on by oppression or at the very least the deprivation of life’s comforts and a sense of safety, drive whole societies to embrace violence and killing as the only answer.But Guerrillas is not merely a checklist of battles and conflicts, the book brims with bright characters, from mujahedin commanders in Afghanistan who slyly let their men blare outlawed music to bards among the compas in El Salvador who promote revolution through verse. Though Anderson does not share Ryszard Kapuscinski’s tone of wonder and eye for quirky detail when enveloped in a foreign culture, his observations have considerable depth and provide the necessary context to shine a light on these often misunderstood conflicts.Originally published in 1992, Guerrillas is improved in a 2004 paperback edition by an introduction and an afterword. The introduction dwells mostly on the then burgeoning insurgency in Iraq, drawing parallels to the insurgencies Anderson covered 15 years prior. In his view, what happened in Iraq was utterly predictable when viewed against the backdrops of earlier conflicts. The afterword, meanwhile, gives a “where are they now” update of the five guerrilla movements covered in the book. Some have fizzled or become legitimate political movements, while two have had far reaching consequences. The Palestinian and Israeli conflict has provided an ever worsening backdrop of violence in the region, while the Afgan insurgency against communist invaders metastasized into a haven for al Qaeda, and ultimately changed the world. This last point underscores the importance of Anderson’s book. Upon original publication, the book must have seemed like a travelogue of dangerous places, but Anderson was really exploring the seeds of conflict that would grow to a global scale a decade hence.

Reviews
C. Max Magee | 1 book mentioned 1 2 min read
● ● ●
Reviews
But the thing I wanted to do with this anthology was get past the stance that we’re going to explain this city. I wanted to get the candid conversations Detroiters have with other Detroiters -- diverse and true and candid conversations people have at a dinner table or in a bar.
Reviews
Bill Morris | 1 book mentioned 3 6 min read
● ● ●
Reviews
Reviews