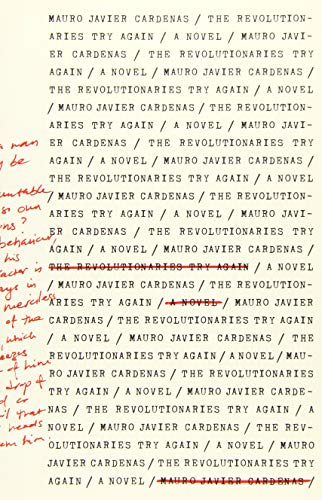 In one of my favorite sequences of Dziga Vertov’s Man with a Movie Camera, you see an editor splicing film offset with shots from the footage being cut. Normally, when we watch films, we take a series of unrelated shots and project causality between the images. Vertov, along with other montage theorists like Sergei Eisenstein, wanted to interrupt this process, forcing us to come to an overarching picture out of conflict and collisions. Simple narrative just couldn’t be revolutionary.

In The Revolutionaries Try Again, debut novelist Mauro Javier Cardenas writes renegade political fiction that would have made Vertov proud. Stream-of-consciousness and meta-fiction meet radio plays, phone conversations, and spliced up pop-lyrics. The tone varies as often as technique: pages and pages of interior monologue with no punctuation, enough em-dashes to look like line divides, sections entirely in Spanish, references to ABBA and The Exorcist alongside Pablo Neruda and Julio Cortázar. You’re never directly informed about what counts as revolution and who in particular is trying to achieve it. Instead, The Revolutionaries Try Again dissects a decade of Ecuadorian austerity and idealism through often jarring and always stunning literary montage.

Cardenas’s novel centers on three alumni of a Jesuit school in Guayaquil: a writer, a bureaucrat, and a playwright. Antonio left Ecuador over a decade ago for Stanford and is writing a memoir about a crying baby Jesus. His best friend Leopoldo, left behind in Guayaquil, takes a job with the pro-austerity government. As the novel begins, Leo has just persuaded Antonio to return to the city, and together they’re supposed to help a friend run for office, which never really happens. Meanwhile, we get oblique connections to their poor classmate, Rolando, who with his girlfriend Eva attempts to rouse people to action by staging a series of radio plays.

But all of this feels like an aside, and whatever revolution we thought would be staged isn’t.

No political campaign, no people taking to the streets. But The Revolutionaries Try Again is just as much an attempt to sort out why telling feels so futile: as a writer, as an undocumented migrant, as a person. Rolando never tells Eva that his sister was almost raped while working as a fifteen-year-old maid. Eva never tells Rolando about how her brother was abducted during her youth. Instead they have imaginary dialogues with the siblings they love but don’t speak to, replaying conversations that can’t, and won’t, happen. Nor are they alone. Leopoldo and Antonio are extremely close friends, but don’t have an easy emotional intimacy. Antonio dreams up, time and time again, what it will be like to see Leopoldo for the first time in over a decade, thinking about what he might like to say but won’t. What’s the point, the suggestion is, of recounting things when things can’t be adequately characterized by words?

To search for the source of his impulse to return to Ecuador by revisiting the night the baby christ cried was pointless, Antonio thinks, just as it’s pointless for him to teach English to immigrant women at El Centro Legal for one measly hour a week, photocopying pages from an ESL book at the last minute and hoping they would smile at him in gratitude, knowing he was fooling himself into believing he was being useful— if all the NGOS and nonprofits of the world ceased their activities, Antonio had asked a British art critic during their first date, would anyone notice?

Many things in the book are described as pointless: Antonio’s baby Jesus story and his tutoring, but also Rolando’s radio plays, Jesuits serving the poor (and, for that matter, the very existence of the lord above), and the unrealized political campaign that brings Antonio back to Guayaquil.

But what Cardenas does so adeptly in his debut novel is highlight conditions against which feelings of pointlessness emerge in the first place. Economic, political and social violence are senseless, and render us unable to tell neat linear narratives about injustice and protest. We’re left with montage, one that resists neat stories about revolutionaries taking on their oppressors, left with weeping statues of baby Jesus, rape, false accusations, and economic sanctions.

Amidst violence, one worries that words too will be twisted and appropriated to serve other ends. But silence is too easy, as Alma reminds Antonio: “I did say you’re an imbecile of course everything’s pointless we’re all going to die doesn’t matter we’re still here/ I’m still here.” That injustice may be here for a long time, is all the more reason that Cardenas’s book should too.

Shivani Radhakrishnan is a PhD student in philosophy at Columbia. Her writing has appeared in the Paris Review Daily, the Boston Review, and n+1.