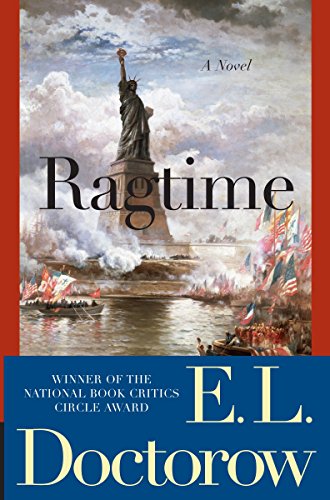 A couple of weeks ago, finding myself between books, I went to my shelves in search of something to read. After a time, I came to a copy of E.L. Doctorow’s Ragtime that I’ve had for years, but never got around to reading. Doctorow’s Billy Bathgate is one my favorite novels, and I recently enjoyed his Homer & Langley. That settled it: Ragtime it would be.

However, when I opened it that night, I let out a disappointed groan. Highlighter marks were everywhere; on the first page of text alone, seven words (among them “stouter” and — snort — “steamers”) were underlined in neon blue, and the sentence “There was a lot of sexual fainting” had been, for some reason, parenthesized. I flipped ahead, and the blue marker was even thicker on subsequent pages. Though I’ve occasionally read secondhand books that previous owners had scribbled through, Ragtime was far too damaged to read. There was practically more highlighter than printer’s ink.

The handwriting had a bouncy innocence to it, leading me to believe that it had come from a high school student, maybe a freshman or sophomore. It also seemed to have come from a female, though the vandal’s gender is immaterial.

Do I have this right? I’m asking you directly, teenager who ruined my copy of Ragtime. Have I identified you correctly?

By now, you’re probably in your 30s; I’ve had the book for at least a decade, and it was old when I got it. Since so much time has passed, then, I hope you won’t be upset with me for pointing out a few absurdities in your novel-wrecking note-taking style. You destroyed Doctorow’s masterpiece; the least you can do is understand my frustration.

First: when you highlighted a word, did you look it up soon afterward? Or did you wait until much later, seeking the definitions of 50 or 60 words at a time? I’m genuinely baffled by your approach. For example, the word “vaudeville” is underlined three times in the first six pages, and “vaudevillian” is marked not long after that. Did you ever look up “vaudeville,” or did you just keep underlining it in manic exasperation? You underlined “affidavit” three times in the same paragraph. Wouldn’t one mark have sufficed? Or did you just think that the blue looked neat? And could you really not figure out what a “sexologist” was? Was it that difficult to parse? Wouldn’t a “cheeseologist” be someone who studies cheese?

Chapter three ends with the sentence “And up through the slum alleys, through the gray clothes hanging listlessly on lines strung across air shafts, rose the smell of fried fish.” A highly evocative passage, seemingly straightforward enough. Yet you drew a bracket around “fried fish” with an arrow pointing to a plaintive question: “Why?” Why? Why would the smell of fried fish rise through the slum alleys? Sadly, I never had the chance to meet Doctorow — he died in 2015 — so I’ve never been able to ask him what he meant by this riddle. But I’d guess — and mind you, it’s only a guess — that it had something to do with the fact that SOMEONE WAS FRYING FISH.

A similar conundrum confronts us on page 17, where you wrote “what year is this???” I assume you’re asking in what year Ragtime takes place — not that, addled by the book, you forgot what year you were actually living in. Operating on that assumption, we can see that, on the first few pages alone, Doctorow secreted a number of clues as to when his story occurs. First, there are references to Harry Houdini, Jacob Riis, and to the shooting, years before, of “the steel millionaire Henry Frick” — so anyone with a decent grasp of American history might begin to infer an answer. Ragtime also depicts European immigration to Ellis Island and Teddy Roosevelt’s presidency. Still, one can’t be sure. Yet there is a tantalizing nugget that, if looked at in the proper way, could answer your thrice-punctuated question. It’s buried deep within the very first line of Ragtime’s very first chapter: In 1902…

At the bottom of page 25, you scrawled “what kind of jail is this?” I assume you’re referring to the prison that Doctorow described Houdini escaping from, but there’s an existential poignancy to your question that I can’t fully shake. Is Ragtime itself — assigned by some tweedy English teacher; full of arcane terminology and long-dead characters — the jail you were referring to? If so, you pulled your own shrewd Houdini move, didn’t you? Because just eight pages later, the highlighting ceased. The rest of the book is blessedly free of your scrawlings, as unmarked as the day it came off the press. It appears that you escaped the novel, mad with glee, never to blue its pages again.

I truly wish you the best. I hope the time you spent trapped in Ragtime didn’t scar you too much, now-aging teenage highlighter. Hopefully, you’re now a well-adjusted adult — and aren’t the sort of almost-middle-aged crank who complains incessantly about trivial matters like, say, highlighter marks on an old paperback. That sort of person can seem like an irritating character in an old vaudeville show, don’t you think?