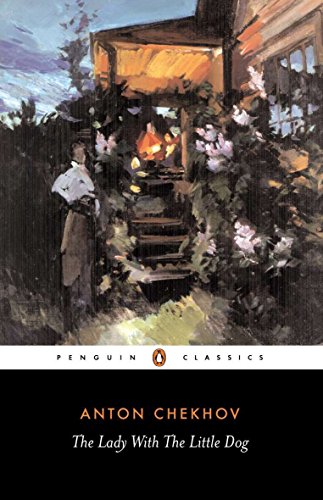 Short story collections undoubtedly reign supreme as the most optimal reading material for the beach. They don’t require the mental commitment that a full-length novel does, they allow for a sense of accomplishment every time you finish one in the collection, and, perhaps more importantly, they provide breaks at precisely the right moment when you need more alcohol. If you’re planning an upcoming vacation, consider taking along J.D. Salinger’s Nine Stories, David Updike’s Old Girlfriends, or Lady with the Little Dog & Other Stories by Anton Chekhov. It is no coincidence that all three have several beach-themed stories, which I take as proof of the validity of my argument.

It is in the latter collection that you will find “The Lady with the Little Dog,” a story so remarkable that fellow Russian heavyweight Vladimir Nabokov called it “one of the greatest stories ever written.” I shamelessly board this bandwagon and add merely that “The Lady with the Little Dog” is the most perfect short story for the summer (Nabokov does not appear to have evaluated art using this metric).

It is 1899. Summer is in full swing in Yalta, the glamorous resort town for the glamorous Russian aristocracy. The Black Sea and the sun converge and collectively shine so bright that they blind. Gurov, our main character, lazily stares beyond the horizon in search of something. Of what? He hardly knows himself. This is how “The Lady with the Little Dog” marvelously opens up, immediately creating a drunken feeling of infinite, if somewhat ominous, possibilities. Isn’t that what summer is all about?

Gurov is a terrible human being: a lying, cheating, misogynistic — but charming! — philander. He’s an Ocean’s Eleven-era George Clooney without a soul. When he hears of a pretty little thing, newly-arrived in Yalta, he considers, “If she is here alone without a husband or friends, it wouldn’t be amiss to make her acquaintance.”

I love this guy.

The pretty little thing, the titular lady with the dog, is Anna Sergeyevna, a young Cruel Intentions-era Reese Witherspoon to Gurov’s winning Clooney. She is recently married, but like all 19th-century literary Russian aristocrats, unhappily so. What happens next is predictable: two strangers at different points in their lives, an encounter in an exotic locale, an inevitable, tempestuous affair. If it sounds derivative, it’s because every star- crossed lovers’ tale you know from 20th-century film and literature is an imitation of Chekhov’s original.

But what Chekhov does in “The Lady with the Little Dog” is extraordinary. He makes you root for the terrible human being. In spite of your better judgement, you long for Gurov to charm the girl, to seduce her, and, perhaps, to break her heart. When Anna confides in Gurov her agonies and unfulfilled dreams, he observes that “there’s something pathetic about her, anyway,” and you laugh hysterically. You feel sorry for Anna, but you decide that if she’s stupid enough to fall for this charming fraud, then she deserves to be swindled. Or maybe you are a moral person, and you don’t feel that way at all.

In any case, you will be as seduced by “The Lady with the Little Dog” as Anna is enamored with the monstrous Gurov. In the characters’ forbidden love affair, Chekhov evokes the spirit of summer: oppressive but liberating, exhausting but exciting, stultifying but intoxicating. Gurov’s life is an eternal summer, and in the summer, every day is a “thirsty day” when one does “not know what to do with oneself.” In the summer, one is particularly susceptible to the wonderful things that surround. For me, it is snorkeling along a coral reef in the middle of the Caribbean Sea; for Gurov, it is sitting next to a beautiful young woman in the dawn of light, with dew on the grass.
I think Gurov wins.

I will not spoil the entire story, but precisely when you think you know how it will all come crashing down, Chekhov surprises. If you rooted for Gurov in the beginning, by the end you’re praying that he gets his happily ever after. But Chekhov has something special planned for Gurov and Anna and the reader. Abruptly, dizzying, the story ends, leaving one gasping for air, unprepared for the solemnity of autumn — much less for the emptiness of winter.

Chekhov makes you long for summer, with all of its intensity, with all of its oppressiveness. He makes you long for a time, in Yalta or elsewhere, when the sun and the sea meet before you, when life overflows with possibilities. As “The Lady with the Little Dog” comes to a close — perhaps disappointingly, perhaps perfectly — even those who dislike the summer months will be left aching, just a little, for a few more drowsily sweltering days.

Luis Antonio Gonzalez is a high school English teacher in Dallas and a writer of short fiction. He writes, among other things, about the intersection of teaching and literature. Some of his essays can be found here. Follow him on Twitter at @literarymrg.

Garth has an essay on Amazon’s celebrity reviewers up at Slate.Full disclosure: It was late at night, in a fit of furtive self-Googling, that I discovered the first Amazon customer review of my debut book of fiction. “Superb,” wrote Grady Harp of Los Angeles. “Fascinating … addictive.” Not to mention “profound.” Such extravagance should have aroused suspicion, but I was too busy basking in the glow of a five-star rave to worry about the finer points of Harp’s style.Check it out.

Why is it that so many people are turned off by the classics? Is it because would-be readers are afraid they won’t “get it?” Or does reading a well-known tome on the subway or in a cafe exude an air of pretentiousness, when it’s more likely that the reader just never followed through on that English lit assignment?In talking about his latest book, Classics for Pleasure, the Pulitzer Prize winning critic, Michael Dirda, said he not only hopes to make the classics appear less daunting and more accessible to the general public, but he also wants to “encourage people to read more widely.”Dirda, a columnist for The Washington Post’s Book World, said his goal is to get people to “read beyond the recognized classics and read beyond the contemporary.” He made his remarks Tuesday during a lecture, co-sponsored by the English-Speaking Union, at the Women’s National Democratic Club in Washington, D.C.Classics for Pleasure consists of about 90 essays, written by Dirda, that describe the importance of lesser-known authors such as Sheridan Le Fanu and Abolqasem Ferdowsi as well as literary giants like Henry James and Christopher Marlowe.Each essay, ranging from two to five pages, serves as a primer on the era and author, with excerpts from famous works. They also offer some much-needed perspective, even for the seasoned reader, and are grouped together with topical headings such as Realms of Adventure, The Dark Side and Love’s Mysteries.But why should these classics, or any others for that matter, deserve a kind of sacred reverence?”Truly distinctive voices, once heard, ought never to be forgotten,” Dirda writes. “More than anything else, great books speak to us of our own very real feelings and failings, of our all-too-human daydreams and confusions.”From Dirda’s point of view, some of those failings and confusions are commonplace on the Web, perpetrated by those who dabble in his trade. He said that while “blogs and the online bookish universe are a wonderful thing… there are no oversights for the most part,” meaning no editorial review like the kind he gets from The Washington Post.He went on to say that some online book critics have a tendency to make a name for themselves by writing “vulgar, rude, outrageous” reviews, and such pieces should not be the standard for literary criticism.While that eventuality seems unlikely, Dirda’s nonetheless uses the book to re-establish his high bar for criticism while drawing in readers to “discover” the classics of yesteryear. One is certainly easier to achieve than the other.See Also: Classifying Classics; Nothing is Dead Yet: The Era of the Trusted Fellow Reader; Literature and History

The God Machine was first conceived by Da Vinci, who called it “The Elliptico Godsmackulator.” So brilliant.

JK Rowling nearly had “to stow her top secret notes for book seven” of the Harry Potter series when flying from New York to England recently due to restrictions on carry on items. “They let me take it on thankfully, bound up in elastic bands,” she told fans on her Web site and attested that she would have sailed back if she had not been able to take the pages with her in the plane. The Guardian has all the details. It would be easy to poke fun at Rowling’s dilemma, but I’d rather push them to let books back on planes (flights between the U.S. and Britain still face baggage restrictions due to the recently foiled terror plots). I can’t imagine flying without a book or two. That’s when I get my best reading done.

Attention prospective authors: not to discourage, but the number of books coming out each year is getting out of hand. According to Bowker, a company that compiles and distributes bibliographic information, approximately 175,000 different books came out in 2003, a rise 19% from the previous year. Many believe this “book glut” is at least partly to blame for the financial woes of many publishers. Here’s the full press release with all the facts and figures. Following up on the comment that Edan left under yesterday’s post. Missing novelist, Helen DeWitt, author of The Last Samurai, has been found in Niagara Falls. Here’s the article. Look for Dan Chaon’s first novel, You Remind Me of Me to be a hot read this summer. Janet Maslin gets the ball rolling with her warm review in the New York Times.BookspottingWhen: Evening 05/26/04Where: The gym at George Washington UniversityWho: A girl on one of the stationary bikesWhat: Catch 22 by Joseph HellerDescription: “Catch-22 is like no other novel we have ever read. It has its own style, its own rationale, its own extraordinary character. It moves back and forth from hilarity to horror. It is outrageously funny and strangely affecting.”When: Late 05/26/04Where: At the bar at Cantina Marina on the waterfront in downtown Washington, DCWho: A man in a suit, puffing a cigar, sipping his drinkWhat: The Prince of Providence by Mike StantonDescription: “Pulitzer Prize-winning journalist Stanton tells the incredible story of Buddy Cianci, America’s most colorful mayor, in this classic story of wiseguys, feds, and politicians riding a carousel of crime and redemption.”