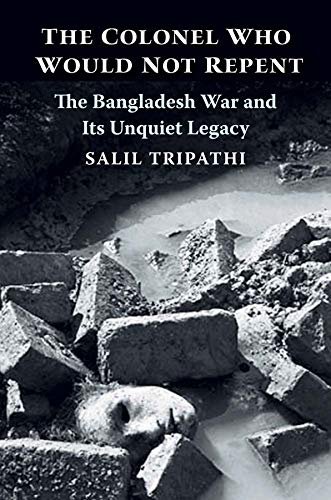 The lyrics to “Song of Bangladesh” must have sounded mournful when Joan Baez first crooned them in Madison Square Garden in August 1971: “When the sun sinks in the west, die a million people of the Bangladesh / The story of Bangladesh is an ancient one again made fresh.”

The occasion was as solemn as the words: along with George Harrison, Eric Clapton, and Bob Dylan, Baez was headlining the first-ever star-studded humanitarian benefit. The Concert for Bangla Desh aimed to support a soon-to-be-independent nation, then enduring a vicious armed conflict. However heartfelt that event, though, Bangladesh’s plight soon lapsed into obscurity in the West. Today, those describing the events of 1971 to Western audiences must often resort to comparisons to another, similarly scaled but much later event: the 1994 Rwanda genocide.

South Asia, by contrast, views Bangladesh’s founding as central to its present-day politics — and now, through Indian journalist Salil Tripathi’s The Colonel Who Would Not Repent: The Bangladesh War and Its Unquiet Legacy, the story is again made fresh. Tripathi’s book revisits Bangladesh’s founding in comprehensive detail. Poignantly, its publication comes at a moment when the nation seems on the verge of its next existential crisis — one that includes now-frequent slayings that the author himself is speaking up against.

The basic facts of Tripathi’s story are well-established. Bangladesh is a country the size of Iowa, surrounded on three sides by India and on the fourth by the Bay of Bengal. It’s long been defined by its language, which boasts the first-ever Asian Nobel laureate for literature, and by its blend of secular, Hindu, and Muslim customs. The area became a province of Pakistan during India’s 1947 Partition; its western masters severely subjugated it. (“Colonialism was not the word for it,” journalist Anthony Mascarenhas said of Pakistan’s abuse of Bengalis in his 1971 book The Rape of Bangla Desh. “A thousand statistical tables would not reflect this Bengali frustration.”) By 1970, two decades of political organizing culminated in Bengalis sweeping Pakistan’s national election. The government reacted to the new Bengali prime minister, Sheikh Mujibur Rahman, and his party’s parliamentary supermajority with desultory negotiations, and then, on March 25, 1971, a military attack. The conflict would last until Bangladesh’s victory that December 16, 1971; in the 267 days between, Baez’s “die a million people” arguably became a literal, perhaps even modest, tally of civilian casualties.

In recent years, authors have begun to revisit Bangladesh’s history. Gary Bass’s 2013 The Blood Telegram: Nixon, Kissinger and a Forgotten Genocide retraces U.S. complicity in the atrocities. Yasmin Saikia’s 2011 Women, War and the Making of Bangladesh focuses on Pakistan’s rapes of over 200,000 women in just nine months, and, unusually, includes Pakistani sepoys’ apologies for their part in the violence. What remains less well-known is the territory where Tripathi, thankfully, spends most of The Colonel Who Would Not Repent: the experience of ordinary Bengalis. In large part, the book functions best to fill in history’s rough outline with vivid depictions of wartime conditions; stories of common courage; and rare, specific recognition of innocents who died.

The best scenes come during accounts like this one, from the survivor of a massacre in a town called Chuknagar:

As Ershad Ali ran through the town…he saw Sundari. She was a child, barely six months old, clinging to her mother’s breast. Her mother lay beside her, and there was blood all over her body. The mother was beautiful, and she had a sindoor in her hair, indicating she was married and a Hindu. Her eyes were wide open; she was dead. She had been feeding her daughter when the bullet got her. ‘I carried the girl in my arms,’ Ershad said…

He ran through the market, seeing many more dead bodies, including many Hindus he had grown up with — Kalachand, who played the drum at Hindu weddings; Bhogirath, who worked as a butcher; Digambar, who was a farmer; and Babunath Biswas, the grocer — all while he kept hearing more and more gunshots. There were many Muslims, too, among the dead –Saifuddin, the butcher; Murshid Ali, the shopkeeper who sold coal; his five children; and Inayat, the mentally disabled man with the mind of a toddler. They were all dead.

Ershad crouched low and passed the maidan and went to the home of Mandar Das, a Hindu man he knew. ‘My father has just been killed,’ he told Mandar. ‘I am going to get the cloth to bury him. On my way I saw this girl…Her mother is a Hindu. Can you look after her?’

Mandar Das and his wife decide to adopt the girl, naming her Sundari. (“I knew she was a Hindu, that’s why I had taken her to a Hindu family. I did not want her stolen from her people,” Ershad Ali concludes.)

Tripathi counterbalances heart-breaking scenes like these with judicious attention to the facts of the genocide. Importantly, he acknowledges that precise counts of those killed are impossible, whether in Chuknagar (which was “a transit point,” a crossroads) or countrywide. Saying as much is controversial in Bangladesh; Tripathi correctly states that many Bangladeshis irrationally insist that three million people died, and “feel that raising such a doubt undermines their suffering and belittles their identity.” Yet he offers a coolheaded overview of the debate, straightforwardly concluding “We simply don’t know.” Just as evenhandedly, he gives credit to Pakistanis — a group who Bangladeshi protest movements have recently made the target of insults like “filthy dogs” — for a recent acknowledgment of national wrongdoing via the 2012 anthology We Owe an Apology to Bangladesh. “It was a brave thing to do,” Tripathi says, “and it was commendable.”

For all its careful balance of emotion and logic, The Colonel isn’t entirely successful. Tripathi’s decision to largely forgo a chronological structure leaves him recounting critical movements in Bangladeshi history at fairly random intervals, often jumping from before the war to after and back again. The disorganization robs the text of power. (By the time a middle-aged Sundari reunites with Ershad Ali in the final pages, the occasion feels more perfunctory than uplifting.) His often tangled management of characters and locations also make the book most comprehensible to readers already aware of Bangladesh’s historical events and prominent figures. Less informed, non-South Asian readers — those for whom the story of Bangladesh truly is both ancient and fresh — will likely have a far tougher time grasping the significance of the book’s more prominent people, places, and dates.

What is far more tragic is that the story is effectively neither ancient nor fresh in Bangladesh itself. Rather, it is the antecedent to the horrors unfolding now. Tripathi’s book extends to the present day, and includes frank discussion of the violent riots, dysfunctional politics, and climate change vulnerability that have afflicted Bangladesh recently. The Colonel Who Would Not Repent serves, then, as a primer to the current crisis — including the extremists’ slaying of foreigners, non-Muslims, and writers that has begun since the book’s completion. Now pressing for international response to the slayings, Tripathi is once again working to protect the same people he champions in these pages.

M. Sophia Newman , MPH, is a journalist and a former health researcher. She has completed research on trauma at Veterans Administration hospitals in Chicago and in Bangladesh via a Fulbright grant, and has earned a certificate in global mental health via the Harvard Program on Refugee Trauma. See her writing at msophianewman.com.