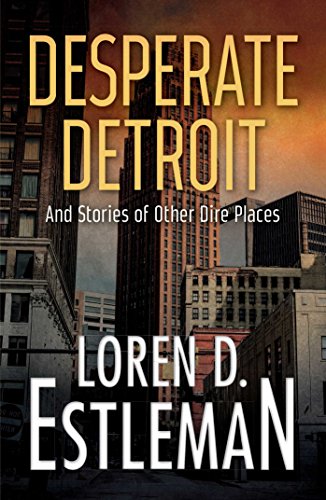 1.
Loren D. Estleman is a crazy prolific writer, in a league with Anthony Trollope and Joyce Carol Oates. In his 63 years, Estleman has produced more than 70 books — novels, collections of short stories, and writing manuals, as well as book reviews and assorted journalism. The words don’t just pour out of Estleman’s typewriters — he owns dozens of them, including some century-old museum pieces — no, they roar out, a relentless typhoon of words — words that are even more remarkable for their consistently high quality than their staggering quantity. In this sense he’s closer to rock-solid Trollope than to hit-or-miss Oates.

Newly published is Desperate Detroit: And Stories of Other Dire Places, a collection that will solidify Estleman’s stature with his hardcore fans while serving as an ideal introduction for uninitiated readers. The book is a sumptuous smorgasbord featuring hit men, riffs on John Dillinger and Dr. Jekyll and Mr. Hyde, a homicidal newspaper reporter, a grifter, an insurance scammer, a coffin-maker, a crime-solving bookseller, a truck-driving contract killer, and a cop who gets seduced into murder. Estleman’s universe is not a just or tidy place. Some people get away with murder, repeatedly, while others get framed for murders they didn’t commit. Everyone’s working an angle, and there are double-crosses and surprise twists, humor and ample darkness. There’s even a vampire western! One of the few things missing from this collection is a hard-boiled story featuring Estleman’s irrepressible Detroit P.I., Amos Walker.

For 40 years and counting, Estleman’s bread and butter have been the western and the crime story, though his fiction ranges so widely, from the 19th century to today, from prairies to ghettos, that it would be impossible and unfair to peg him as any single kind of genre writer. If anything ties Estleman’s work together, it is the eternal presence of crime in human affairs. “Crime,” as he writes in the new book’s introduction, “is the most durable small business we have.”

So this book was turning out to be more than a sampling of stories by a writer with a vast range, an iron work ethic, and a time-tested ability to please readers. The book is also a window into the way the publishing of short fiction has changed in America since World War II — a time of brutal contraction both in the audience for short stories and in the venues where they get published.

2.
The first issue of Ellery Queen’s Mystery Magazine, featuring stories by Dashiell Hammett and Cornell Woolrich, was published in the fall of 1941, which means the magazine has now reached the venerable age of 75. The first thing you need to know about Ellery Queen is that he didn’t exist. It was the pen name of two cousins, Frederic Dannay and Manfred B. Lee, who developed an unusual division of labor. Dannay edited the magazine until his death in 1982, while the two collaborated, sometimes contentiously, on the short stories and novels that appeared under the byline of Ellery Queen and sold some 100 million books. “We fight like hell,” Dannay said of his collaborating cousin. He added, a bit more loftily, “Our books are as much a canvas of their time as the books of Proust were of his time.”

In 1956, a sister publication, Alfred Hitchcock’s Mystery Magazine, began publishing, also edited by Dannay. Its only affiliation with the great filmmaker was the use of his name and image on the cover for branding purposes, sort of like Donald Trump spring water. The magazine was born at what would seem an unpropitious moment — as the slick magazines (Collier’s, The Saturday Evening Post, Story, Good Housekeeping) were either going out of business or dropping fiction, while the pulps (Black Mask, Two-Fisted Detective, Weird Tales) were succumbing to television, paperback novels, comics, and changing post-war tastes. And yet, both EQMM and AHMM managed to survive the shakeout, and they continue to thrive.

Dannay’s likening of Ellery Queen to Proust may be a stretch, but it was revealing. “One of Dannay’s aspirations for EQMM was to demonstrate that the mystery was a ‘genuine literary form,’” the magazine’s current editor, Janet Hutchings, told me in an email. “This led to the publication of work by more than 40 Nobel and Pulitzer Prize winners, including William Faulkner.” Other names to grace the table of contents include Agatha Christie, P.G. Wodehouse, Ed McBain, Isaac Asimov, Ruth Rendell, and Ian Rankin. EQMM was the first magazine to publish Jorge Luis Borges in English. Stephen King, a frequent contributor, calls it “the best mystery magazine in the world, bar none.”

Maybe one reason the magazine and its sister continue to thrive is that our age has finally caught up with Dannay’s 75-year-old vision. In 1941, as the Christian Science Monitor put it, the detective story was “frowned upon by the fusty gatekeepers of the literary establishment.” Recently, after years of being segregated by those gatekeepers, writers began to allow “high” and “low” literary genres to cross-pollinate freely and fruitfully. The result was mash-ups, crossbreeds, delirious hybrids. Along with Estleman’s vampire western, we got movies like Cowboys and Aliens. Novelists, including Mark Binelli (Sacco and Vanzetti Must Die!) and Matthew Sharpe (Jamestown), fused seemingly incompatible genres into novels that are called “ashistorical fantasias.” Michael Chabon’s romp about comic book artists, The Amazing Adventures of Kavalier & Clay, won the 2001 Pulitzer Prize. Elmore Leonard — primarily a writer of crime and western fiction like Loren D. Estleman — won high praise from such “literary” authors as Walker Percy and Martin Amis. Meanwhile, there have been successful efforts to resuscitate the impulses that once drove pulp fiction, most notably the Hard Case Crime series, which has published more than 100 titles in the past dozen years, including a lost novel by James M. Cain, an original by Stephen King, and, later this year, a lost novel by Erle Stanley Gardner, the creator of Perry Mason. “We’re trying to keep that style of publishing alive,” the series’s co-creator, Charles Ardai, told me. “Short books with a lot of velocity, compelling plots, beautiful cover art — and not too much ‘literary’ artifice.”

Ardai, not surprisingly, is an ardent fan of EQMM and AHMM. (He has worked at the former and contributed stories to both.) He’s also a fan of Loren D. Estleman. “He’s a bit of a genre blender,” Ardai says. “He’s of that pulp tradition where a writer would write westerns and horror and crime. I think he’d be proud of being described as a throwback to an earlier era, when writers wrote prolifically and never failed to entertain. It’s not haute cuisine — it’s red meat, the stuff you can’t put down until your plate is clean.”

3.
When I’d finished reading Desperate Detroit, I called Estleman at his home in Michigan. (Full disclosure to fend off charges of log-rolling: Estleman wrote an enthusiastic review of my first novel in The Washington Post Book World in 1992, I sent him a thank-you note, he responded — and we’ve been pen pals ever since.) When Estleman came on the line, I asked him about the recent cross-pollination between genres, and between genre and literary fiction.

“I’ve made the point for years now that no genre ever dies,” he said. “Mainstream literary writers — people like Anne Tyler, who I like very much — are fighting over a smaller and smaller patch of ground. And genre writers are writing with more maturity. What genre writers understand now is that when someone dies, someone is out there to mourn them. Every death has a repercussion. So there’s a maturity that wasn’t always there before. These are novels about social conscience, reflecting what’s going on in our world.”

We’re getting back to Proust here. When I asked him about the importance of EQMM and AHMM to writers of short fiction, Estleman said, “They’re great magazines. They support unknown writers and they’ve launched a lot of people. They pay quite well, too, and sometimes the stories get included in anthologies. I’m still getting royalty checks for stories I wrote 30 years ago.”

But Estleman doesn’t deny that the shrinking of the market for short fiction has put a pinch on him and every other writer working today. “I would have loved to work during the golden age of pulp magazines,” he said. “There were at least 100 of them, and a writer could just go down the list submitting a story until it sold. Elmer Kelton, the great western writer, once told me that back in the day a writer could become a millionaire at half a cent a word.”

It’s something Anthony Trollope understood more than a century ago. And while Loren D. Estleman may not be a millionaire, he’s a writer who has made a solid living by working every day, one word at a time. Writer’s block is not in his vocabulary.

Naturally he has a new novel out, a western, featuring one of his most durable characters, U.S. Deputy Page Murdock. It’s called Cape Hell, a title that would have been right at home on the cover of a pulp novel.

Essays
In America, teachers are either seen as angelic or caustic, saviors or sycophants. These stereotypes enable politicians to convince the public to support the latest education fad or slash needed budgets. The reality is we teach because we love to help kids, and we think literature is a way to examine and understand our complex lives.
Essays
Nick Ripatrazone | 7 books mentioned 8 5 min read
● ● ●
Essays
The witch stood up and let out a piercing whistle while fervently shaking a gourd rattle, which I first mistook for a maraca. As she spoke, her voice changed, become low and growling and beautifully theatrical.
Essays
Mary Pauline Lowry | 7 books mentioned 2 5 min read
● ● ●
Essays
Opening sentences are not to be written lightly.
Essays
Jonathan Russell Clark | 7 books mentioned 23 12 min read
● ● ●
Essays