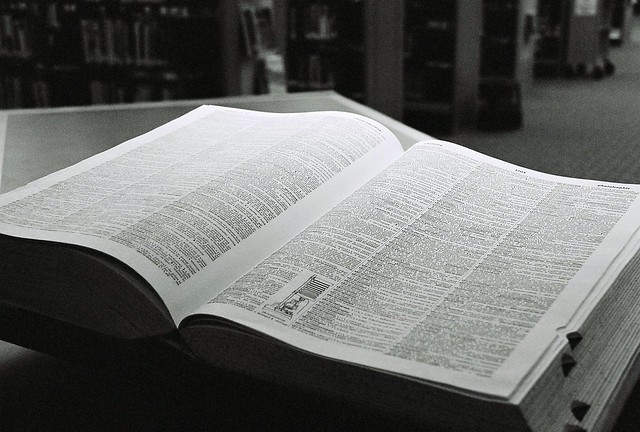 With the literary and publishing landscapes in near-constant states of flux, once-familiar terms have come to seem unfamiliar (saying that you’re “reading a book on your phone,” for example, would, not so long ago, have been evidence of madness). With that in mind, we offer these baseline definitions for our ever-changing reading world.

Political Autobiography: An autobiography, often released during a campaign cycle, meant to portray its author as something other than the craven, amoral, failure-prone, friendless, cash-whore shitneck that he or she actually is.

Celebrity Autobiography: A way for a given celebrity to relate fascinating, behind-the-scenes stories in the inimitable voice of his or her disgruntled freelance ghostwriter.

Historical Fiction (Genre): A literary genre in which authors may write about historical figures without remaining faithful to historical fact. (See Einstein Gleams the Cube, by E.L. Doctorow (Random House, 1991).)

Knausgård: To brood incessantly over seemingly trivial matters. (“Jim is in the study with the lights off, Knausgårding about the Celtics game.”)

Wuthering Heights: A method of killing any nascent interest in reading that a high-school student may have.

Go Set a Watchman: To reap an unscrupulous profit from the elderly and infirm. (“Gary sent his rich aunt a get-well card, but he’s just trying to Go Set a Watchman her.”)

Brick-and-Mortar Bookstore: A type of small business so unique and charming that Amazon.com — online purveyors of dishwashers, tube socks, and lice shampoo — is now attempting to make inroads in the market.

Library: A structure, often found in schools and municipalities, that houses rows of outdated computers, often surrounded by books.

Audiobook: A method for allowing John Lithgow to pay the taxes on his second vacation home.

Library Book: A system of delivering old receipts, ancient ketchup stains, and dry, flattened boogers from one patron to the next.

Borrowed Book: An item which, when loaned to a friend or family member, will be returned as often as four percent of the time.

Epigraph: A chosen quote that appears before the first chapter of a book, generally written by a more skilled writer than the book’s actual author.

Blurb: Praise, often appearing on a book’s back cover, written in prose so purple as to distract from the fact that the blurb’s writer merely skimmed the book while watching television.

Author Photograph: A promotional image of an author, meant to portray its subject as something other than the sallow, computer-bound shut-in that he or she actually is.

Aspiring Novelist: A person often seen frowning worriedly into his or her sticker-covered laptop at any number of urban coffee shops.

Voracious Reader: A phrase meant to inform you of its speaker’s endless appetite for knowledge, learning, and being perceived as intelligent.

Internet Humorist: A person who overestimates his own propensity for humor, and is grievously enabled by the Internet’s need for cheap, disposable content.

Writing is hard. Everybody knows that. And one of the hardest things to write — and write well — are similes. So, as a public service, I’m supplying the general public with the following fair-use similes. That’s right: these are 100 percent free to use. Sprinkle them throughout your own writing — your emails, your letters, your ham-fisted dystopian romance novels — and be amazed by the lift in the overall quality of your work. You can thank me later.

1. The sun descended toward the horizon like a fried egg sliding off a fat man’s naked thigh.

2. Her smile was as wide as the Mississippi River, with none of the intractable benzene pollution.

3.They made love as frantically as a weasel trying to escape from a linen closet.

4. The child, in knee socks and culottes, was as carefree as Ed Gein before he exhumed all those corpses to make pajamas from their skin.

5. He felt as hopeless as a fishmonger at a Missouri nudist colony.

6. His love for her was as true as a correct answer on a true/false test about truth.

7. His penis stood at attention like a nervous soldier on his first day of basic training. The penis even wore a tiny camouflage helmet and, somehow, combat boots.

8. “How dare you?” he exploded, like a rotten cassava melon thrown at a passing tram.

9. The dog tilted its head quizzically, as addled as a sleepy toddler in a Yale robotics colloquium.

10. His voice cracked like an egg that would then be fried and inexplicably placed on a fat man’s naked thigh.

11. The room grew as dim as the dark side of the moon, which is also the title of Pink Floyd’s best album, and if you’re going to say Wish You Were Here is better, man, go back and listen to Dark Side. I mean, do yourself a favor and really listen to it.

12. The moment was as disappointing as arriving at the Sizzler hot bar with an empty plate, only to find that the whole damn place is plumb out of corn fritters.

13. His shoes squeaked on the tile, as distracting as a dreadlocked busker playing ska-inflected Dave Matthews covers at your great-aunt’s funeral.

14. Sadness ripped through him like that weird chest pain you always get after one too many gluten-free toaster waffles.

15. He stood tall as he glided confidently across the crowded room, like Manute Bol on rollerblades.

16. It was eerily quiet in the forest clearing, as if God himself had been all, like, “Dude, shut up, I think my parents are coming!”

17. The emotion that filled his heart was as pure as water poured from a PUR 7-Cup Water Pitcher. (This simile brought to you by PUR.)

18. Shaken, she felt as fragile as an egg that would then be cracked, fried, and inexplicably placed on a fat man’s naked thigh.

Picture, as a backdrop, one of those primitively drawn 19th-century mourning paintings with rickety white gravestones and age-worn monuments standing under the faded green canopy of a couple of delicately sketched trees. Add…some Edward Gorey-style ghosts, skittering across the landscape — at once menacing, comical and slightly tongue-in-cheek
— From The New York Times Review of George Saunders’s Lincoln in the Bardo