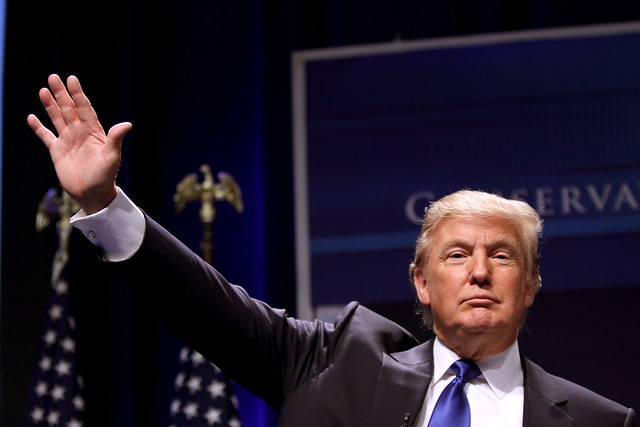 I began my Contemporary Novel course this year with “Writing American Fiction,” the 1960 essay by Philip Roth that argued that “the American writer in the middle of the twentieth century has his hands full trying to understand, describe, and then make credible much of American reality.” Watching the presidential debates on TV, Roth wrote of Richard Nixon, “Perhaps as a satiric literary creation, he might have seemed ‘believable,’ but I found…my mind balked at taking him in. Whatever else the television debates produced in me, I should point out, as a literary curiosity, they also produced professional envy.”

My students nodded in recognition. “And now we have Trump!” they said, as if Roth might have written the same essay today. I was less certain. I told them that in a 1984 interview with the Paris Review, Roth had said, “Any satirist writing a futuristic novel who had imagined a President Reagan during the Eisenhower years would have been accused of perpetuating a piece of crude, contemptible, adolescent, anti-American wickedness,” and I wondered — what if one of my students had written it last year, a piece of fiction that had described, exactly as it unfolded, the Trump campaign from the announcement of his candidacy to the Iowa primary, how would that have been received? Would I have read it with “professional envy?”

Of the imaginary Reagan novel, Roth said, that writer “would have succeeded where Orwell failed, he would have seen that the grotesque to be visited on the English-speaking world would not be an extension of the repressive Eastern totalitarian nightmare, but a proliferation of the Western farce of media stupidity and cynical commercialism — American philistinism run amok.”

I imagine “Trump for President: A Grotesque” as a piece from my Advanced Writing Class. Its subtitle is “American Philistinism Run Amok.” As I take the pages out of my folder, rather than feeling “professional envy” I suffer a wave of professorial disappointment. The student is clever but her satirical eye untrained. She’s attacking her subject with a hammer. The premise is just too broad — crude and adolescent. The details with which she draws her character — the hair, the wife, the tan — feel overblown and cartoonish. There’s no room for subtlety or irony. On page two, when the candidate announces that he wants to build a beautiful, classy wall across the southern border and have the Mexicans pay for it, I scribble in the margins “satire demands a lighter touch.”

Definitely, there are parts of the story that I love — that bit on page six, the doctor’s note that misspells “To Whom It May Concern,” and goes, “if elected, Mr. Trump, I can state unequivocally, will be the healthiest individual ever elected to the presidency” — that’s a stroke of real genius, a sign of a writer with a gift. I will write an enthusiastic letter of recommendation to an MFA program. But the tweets — “Hypocrite,” “the ultimate hypocrite,” “SAD!”, “SO SAD!”, “failed campaign,” “failed image,” “failed on the border” — get tiresome. Sure, there are occasional flourishes of voice — “he’s bottom (and gone) I’m top (by a lot)” — but these are drowned out by the heavy-handed repetition, and on the page the gears of satirical invention are visible, the writer is telegraphing her intent. In conference, I wonder aloud if she’s found her true subject matter.

Believe me — I am not here discounting Trump’s genius with a tweet. But I’m arguing that his genius is not so much rhetorical as it is assaultive. Watching Trump on TV, I think not so much, “I wish I had written that,” but “Would it be possible to write that?” Maybe as a broad, post-modern, metafictional lark? But that’s what it feels like already.

In 1993, David Foster Wallace wrote a much-cited essay questioning the efficacy of post-modern fiction in the television age. Television, Wallace argued, especially advertising, had swallowed up the hippest kind of irony that fiction writers had to serve. “What do you do when post-modern rebellion becomes a pop-culture institution?” he asked. “How can the idea of rebellion against corporate culture stay meaningful when Chrysler Inc. advertises trucks by invoking ‘The Dodge Rebellion’? How is one to be a bone fide iconoclast when Burger King sells onion rings with ‘Sometimes you gotta break the rules’? How can an Image-Fiction writer hope to make people more critical of television culture by parodying television as a self-serving commercial enterprise when Pepsi and Subaru and FedEx parodies of self-serving commercials are already doing big business?” He called this, “television’s institutionalizing of hip irony.”

But Trump, it seems to me, offers something even more cynical than hip irony: a televised, commercialized, self-serving, big-business parody incarnate, asking voters to support him in his revolution. As recently as Jeb Bush, political candidates cloaked their warmongering and racism in euphemism, the kind of thing that so outraged George Orwell:

In our time, political speech and writing are largely the defense of the indefensible. Things like continuance of British rule in India, the Russian purges and deportations, the dropping of the atom bombs on Japan, can indeed be defended, but only by arguments which are too brutal for most people to face, and which do not square with the political aims of political parties. Thus political language has to consist largely of euphemism, question begging and sheer cloudy vagueness.

It was Ronald Reagan’s gift to spin sinister euphemism into advertising cheer, like renaming the MX-missile “The Peacemaker.” (To which Johnny Carson suggested calling napalm “crazy foam.”) George W. Bush in his flight suit and “Mission Accomplished” banner turned the Reagan cheer into action-movie spectacle. But Trump’s act is beyond that. It’s reality television. A nasty finger pointing in your face. His words are for shouting, not for persuading, and not for indicating sense. He won’t let any Muslims in the country. He’ll round up the Mexicans; it’ll be just like Japanese internment camps and Eisenhower’s Operation Wetback! He cites fraudulent racist statistics concocted by white supremacist groups. He does a cruel impression of an old acquaintance’s crippling joint disease, and then denies ever knowing the guy (“despite having one of the all-time great memories.”)

“Always exaggerate,” that was Isaac Bashevis Singer’s advice for bringing a character to life. But how could a writer exaggerate this?

Trump’s pronouncements are real and unreal. On the one hand, he comes on as a straight-talker. On the other hand, no one believes a thing he says. “If you take what he says literally,” explains Bill O’Reilly, “he can be a frightening guy.” According to old Bob Dole, Trump could “probably work with Congress, because he’s, you know, he’s got the right personality and he’s kind of a deal-maker.” He’s achieved his image as an honest, pragmatic, hard-headed businessman, and he’s done so by spouting hysterical, vicious lies. Trump’s not trying to fool anyone or to hide anything. He’s not ironic — he’s not saying one thing and meaning another. His rhetoric is all-time big, like the gleaming brass façade of a multi-billion dollar skyscraper. The letters are all caps and gold-plated, and what they say is: TRUMP, TRUMP, TRUMP! How’s that for a mot juste?

My imaginary student writer had a vivid, farsighted imagination, but her medium wasn’t up to her task. The writers’ tools — subtlety, ambiguity, drama, or implication — have no place in this world. More to the point: this world, this story, offers none of those things to my budding novelist.

For example, let’s turn to page four of her story. See all the question marks and exclamation points I scrawled in the margins? When Trump calls Megyn Kelly’s vagina a “whatever” and then says by “whatever” he doesn’t mean “vagina,” that isn’t a double-entendre, not even a single entendre, it’s not an entendre at all — the pronoun doesn’t refer to anything, he’s just expressing disgust, maybe feigned disgust, maybe it’s just for show of some kind of locker-room machismo, and the show of machismo feels “honest” because of its flagrant gynophobia — Jeb Bush is way too low energy to talk like this, Hillary Clinton too much of a politician. “Whatever!” The syllables are full of meaning, but meaning without relation to words.

“The actuality is continually outdoing our talents,” Roth wrote in 1960, “and the culture tosses up figures almost daily that are the envy of any novelist.” But in the case of Trump: if you wrote the actuality, even if you had predicted it a year in advance, the story would have come off as contrivance, the dialogue flat, the drama cringe-worthy and unimaginative — whatever. A half century after “Writing American Fiction,” it’s as if reality itself has turned to cliché.

The first means of transportation was fear, so said Mel Brooks’s 2,000 Year Old Man. And the first language, according to Brooks, was Basic Rock. Trump’s language is Basic Cable, which is to my ear is more like Rock than it is like written English. The novelist’s best response? Maybe a piece of granite thrown through the screen.

Gabriel Brownstein is the author of two books: a collection of stories, The Curious Case of Benjamin Button, Apt. 3W (winner of the 2002 PEN/Hemingway Award); and a novel, The Man from Beyond. He teaches English and creative writing at St. John's University in Queens, NY.

Essays
Failing to sell my book killed the part of me that still believed I was going to be a famous writer. To my astonishment, this realization set me free.
Essays
Michael Bourne | 1 8 min read
● ● ●
Essays
● ●
Essays
Essays In Person

Essays
Pepys’s fragmentary, digressive, contradictory, messy diary foreshadows our own individual self-fashioning. In Pepys we see Facebook; we see Twitter.
Essays
Ed Simon | 13 min read
● ● ●
Essays
If you talk to literature professors, you may have heard them wonder aloud at the tendency of their students to diagnose characters. Anna Karenina clearly has borderline personality disorder, Holden Caulfield seems to have been abused as a child, Raymond Carver’s characters wouldn’t have these problems if they’d just go to AA.
Essays
Jen Bannan | 28 6 min read
● ● ●
Essays
Essays
If innovation is in itself a destructive gesture, can that generative violence be placed in service of activism and advocacy through language?
Essays
Kristina Marie Darling | 1 6 min read
● ● ●