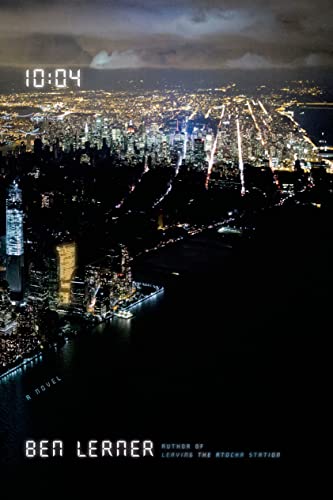 Ben Lerner can’t possibly be the persona that inhabits his fiction, the one who surfaces fleetingly in the jagged word clusters that make up his poetry. This shifty, brooding character might share some basic reportable details with his creator, but the difference between them, between writer and work, serves as the primary tension in all of Lerner’s writing. If works of art were about something, instead of existing self-sufficiently for themselves, this is what Lerner’s work would be about: the chasm between a life lived and a thing made; the discouragement one suffers when trying to find one in the other.

With his second novel, 10:04, Lerner has decisively passed from the abbey of poets, who trained him in these stark aesthetic distinctions, into the bustling town of fiction. (If 10:04 were about something, it would be about this passage.) His poetic pedigree draws attention like the priest’s white collar worn at a pub. At 35, he is still very much a younger poet, precociously so, ten years after an award-winning first book, The Lichtenberg Figures, followed in 2006 by Angle of Yaw, a National Book Award finalist. He edited a literary journal and received a Fulbright Scholarship to Spain, and though it is technically impossible to determine precisely how much the latter experience contributed to Lerner’s first novel, Leaving the Atocha Station (2011) deals entirely with that kind of experience abroad.

On his fellowship in Spain, the young Topeka-bred poet Adam Gordon worries over his incapacity for being profoundly affected by art. He stares at paintings to no avail. When Spanish translations of his poems are read at a Madrid art gallery, he is bafflingly applauded.  The better his Spanish gets, the less poetic he seems around his Spanish friends. Leaving the Atocha Station, named after an early John Ashbery poem, amounts to a deeper disillusionment than in the standard artist novel, where the audience refuses to sanction the artist’s naïve ambitions. In Lerner’s discursive first-person, a provincial romantic fervor is lost on Adam as he examines the “disconnect” between his voided encounters with artworks and “the claims made on their behalf.”

Lerner, on the other hand, has good company among a faction of likeminded American novelists and critics who bristle at the hidebound claims they insist are responsible for an embarrassing profusion of substandard literary product. Simple, re-teachable tropes reign because they are market-tested, while advanced and otherwise marginalized techniques are branded Difficult, because the new is never as easily digestible, or salable, as the familiar. These prose writers—anyone who wasn’t appalled by David Shields’ Reality Hunger—admire the poetry community for valuing their progressives, thus keeping pace over the last century with the vanguards of other media. In both of Lerner’s novels, there is a sense of his sentences catching up, unfurling, distending, pursuing the unclaimed experience or the unexplained artwork. He structures his fiction around passages drawn from his growing body of criticism—studies of John Ashbery and damaged or “totaled art”—as well as the writings of others, like Daniel Zalewski’s essay on Christian Marclay, designer of the 24-hour video montage The Clock, which is given a prominent thematic role in 10:04.

Collage, when used in Lerner’s novels, doesn’t result in the patchwork effect applied by a proponent like Shields in How Literature Saved My Life. Lerner’s novelist sensibility is to cohere and blend, the way Norman Mailer incorporated the shards of Gary Gilmore’s prison letters into the grand cathedral window of The Executioner’s Song. The found objects discovered in 10:04—photographs, poems, epigraphs—are characters that, above more conventional plotlines in the novel, galvanize the contemplative momentum.

The crown jewel of these objects—the antagonist—is a short story published by Lerner (but also his protagonist, Ben) in The New Yorker. (Other excerpts have appeared in The Paris Review and Harper’s.) For the poet in the novel, this story is a moment of concession, a means to the curse of a six-figure book deal. For Lerner, it’s a reconciliation of language. The sequence of untitled sonnet-length poems that make up The Lichtenberg Figures degrades linearly from more coherent, finished announcements to scattershot surrealist amalgams. It is more rationally conservative, more reasonable, than John Ashbery’s debut, Some Trees, published nearly fifty years earlier. Or maybe it could be seen as progressively seeking territory beyond the old familiar conservative-progressive continuum of styles.  (“Perhaps what remains of innovation/is a conservativism at peace with contradiction,” Lerner half-kids.)

His most recent book of poems, Mean Free Path, makes use of even shorter overlapping units or strips, fused into nine-line stanzas. The barrage of interruptions conspire to strengthen or stress the precious attractions between words. At this threshold of coherence, Lerner maintains a formal unity of concept and appearance. This formal awareness is a constant presence throughout his novels, always holding the reader at an honest critical distance from the words—critical in both senses, skeptical and art-loving.

Adam Gordon, unbeknownst to him, takes us on a journey through stages of suggestion and communication, led by Lerner’s hand. His Spanish, at first, is lacking. The dialogue is paraphrased and indeterminate. Facial cues go unrecognized or misinterpreted. Adam’s mystique thrives on meaningful silences his acquaintances run with, or so he thinks. He changes his story. First, his mother is dead. Then, he says she’s dead because she’s ill. His father is a fascist. Adam is less a poet and more like one of Lerner’s poems.

In Jonathan Lethem’s essay collection, The Ecstasy of Influence, he suggests that “the voices in so-called ‘nonfictions’ were themselves artful impostures, arrangements of sentences…that mimicked the presence of a human being offering sincerely intended and honestly useful guidance into this or that complicated area of human thought or experience.” It is the fictional element in nonfiction, Lethem reminds us, that makes the autobiographical question moot. But starting from words isn’t necessarily starting from scratch. This I think is the genuine motivation for collage, and also pastiche. Nothing new under the sun, but also infinite combinations and riffs.  Lerner’s new poet-cum-novelist stops worrying about the novel. Lerner clearly loves it.

Christopher Wood is a native of Springfield, Massachusetts, who now lives on Long Island. His essays have also appeared on Full Stop.