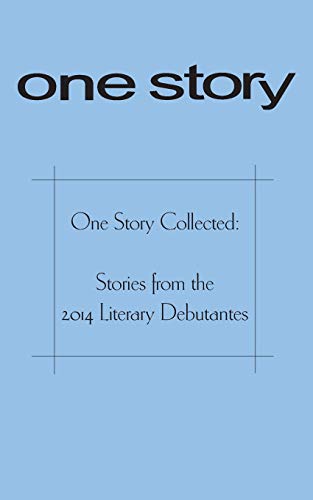 Earlier this month, the editors of One Story sent out an email blast announcing the publication of the 12-year-old literary magazine’s first anthology, One Story Collected: Stories from the 2014 Literary Debutantes. Aside from the magazine’s annual “Literary Debutante Ball,” honoring the seven authors featured in the collection, and a reading at Brooklyn’s Greenlight Bookstore, the editors made no other effort to publicize the book launch. If the collection has been reviewed elsewhere, I’ve missed it. The book is being published via CreateSpace, a print-on-demand publisher owned by Amazon, which means that other than a few stray leftovers on Greenlight’s shelves, the book is only available for purchase online.

Yet despite its understated launch, One Story Collected is one of the strongest collections of short fiction I’ve read since Claire Vaye Watkins’s 2012 stunner Battleborn. Not every story in Collected  is a gem, but the hits-to-misses ratio is high, and two stories in the collection, Molly Antopol’s “The Quietest Man” and Amelia Kahaney’s “Fire Season,” are lights-out terrific. If One Story Collected is a stethoscope to the heart of contemporary American fiction, the news is good: despite a run of economic shocks to the publishing industry, the muscle that pumps fresh blood into the system is still beating like a tom-tom.

In a subtler way, the collection offers reassuring evidence that there is in fact a functioning system to pump new blood into. In the digital age, anyone can start a literary magazine, but to keep going past the first few issues a journal needs to develop a revenue stream, and for publications with more writers sending in their work than readers willing to pay to read it, it makes increasing sense to monetize the submission process. Hence, the boom in writing contests, and the advent of online journals like Narrative, which offers its content for free but charges a fee for unsolicited submissions.

From its inception in 2002, One Story’s co-founders Hannah Tinti and Maribeth Batcha, have been more creative than most in finding novel ways to leverage their journal’s sterling reputation. The pair set up One Story as a non-profit, enabling its donors to get tax breaks, and they have run workshops taught by Tinti and others, sponsored a writing conference on Italy’s Amalfi Coast, and thrown fundraisers like the Debutante Ball that One Story Collected grew out of. One thing they don’t do is charge fees for writing contests. (The journal did once run a fee-based contest in 2004, and One Teen Story, the journal’s new young-adult offshoot, runs a contest today, but there’s no entry fee.) In other words, in a digital world that keeps making it easier for writers to submit to literary magazines but harder for those magazines to sell the work they publish at a price above zero, it is refreshing to see One Story choosing to monetize its actual product, the stories it publishes, rather than all the writers itching to appear in its pages.

It helps, of course, that the stories are good. As its subtitle suggests, One Story Collected is not a standard best-of anthology, but a celebration of the magazine’s “Literary Debutantes,” seven One Story authors who published debut books in the past year. The best of the lot, for my money, is the opening story, Antopol’s “The Quietest Man,” a small miracle of compression that manages to fit a novel’s worth of humor and anguish into 24 pages. The quietest man is Tomás Novak, a one-time dissident in Communist-era Czechoslovakia famous for maintaining a stoic silence under police interrogation. Having settled in the U.S., where he has traded on his revolutionary past to eke out a living as a writer and teacher, Tomás has learned that his daughter, Daniela, has written a play about him, which he fears will focus not on his dissident years, but on his lousy history as a father.

The story turns on a fraught weekend Tomás spends with 23-year-old Daniela, who was raised almost exclusively by his ex-wife, whom Tomás fears has good reason to have filled his daughter’s ears with unpleasant stories. The two warily circle each other, each suppressing a secret, as Tomás struggles to extract from Daniela the version of the truth she plans to tell about him, until it dawns on him that he is using the same tactics on his daughter the Czech police used on him. And yet he can’t stop. “Part of me was saddened that my daughter was the kind of person who would crack so easily,” Tomás writes, “that the wall she’d built around herself could be so easily kicked down, but a bigger part of me just needed to know how the play would begin.”

If “The Quietest Man” is a propulsive interior detective story, the success of Kahaney’s “Fire Season,” set in a marginal subdivision on the edge of California’s Death Valley, relies more on its foreboding setting and odd, finely drawn characters. The story opens with 13-year-old Marni gazing at her face, “sloped and shiny as a waxed apple,” in the mirror, “amazed to find that without warning, an endless period of ugliness seems to have finally lifted from her, leaving someone new. Someone altogether better.” Kahaney sets off Marni’s smoldering desire for a neighborhood boy named Pablo with a wildfire burning in the hills that threatens to engulf the subdivision. As the wildfire creeps in, Kahaney writes, the “kids are jangly, squirmy” while their parents “sit like bullfrogs in darkened living rooms, having abandoned their usual puttering efficiency to stare glassy-eyed at muted televisions, lulled by the soft wheeze of air conditioners.” The story, which rises to its crescendo in an unsettling scene in which Marni and Pablo hurl rocks at each other as hard as they can, carries the emotional weight of poetry with the assurance of naturalistic prose.

A studied quirkiness is the stock-in-trade of so much contemporary short fiction, and occasionally the writers in One Story Collected take it too far. James Scott’s meandering “The Strings Attached” takes 26 pages of misadventures with the oddball natives of the all too aptly named town of Tangent to drain the drama from a tale of a man grieving over the deaths of his infant twin daughters. Similarly, Rachel Cantor tries a bit too hard to crank up the wacky in “Picnic After the Flood,” though, in her case, her exertions are redeemed by sure-fire comic timing and the lingering anguish of a single mom hoping not to have her heart broken by a man who seems too good to be true.

The writers in One Story Collected work for their readers’ attention, but there is little of the desperation one sometimes feels when literary authors start tossing in gratuitous murder plots and characters with magical powers, as if the stories of actual people leading actual lives wouldn’t be enough to stop readers from peeking at their Facebook feeds. Thus, David James Poissant’s “Refund” taps into the hot-button issue of parental competitiveness over children’s IQ, but at bottom the story is a simple, and dead-on-accurate, portrait of a crumbling marriage. Likewise, Ben Stroud’s “Eraser” riffs and sallies in all manner of seemingly non-linear ways, but always returns to the core story of a boy coming to terms with the gruff man his mother has chosen as her second husband.

It may seem curious at first that One Story is publishing its first anthology on its own, but Tinti says she and the other editors never sought out a traditional publisher for One Story Collected. “We wanted to test the waters, so [we] just thought we’d try it ourselves,” she wrote in an email. “We’re excited to make these stories available (we’ve sold out of many of these in back issues), and most important, to help promote/spread the word on our Literary Debutantes’ new books.”

This makes an interesting kind of sense. By relying on print-on-demand technology and spending little to publicize the launch, One Story is hedging its bet. If readers find the book and like it, then One Story will have found a new way to recoup its investment in stories it has already edited and published. If, on the other hand, no one buys it, what really has the magazine lost? But if it’s a cautious gamble, it is a gamble nevertheless, one that turns on the quality of the writers the magazine has published, rather than the desire of writers everywhere to be among their number. This is a sign that the editors of One Story believe in the work they’ve published. In the case of One Story Collected, it isn’t hard to see why.

I was first alerted to Wells Tower’s existence in 2004 when a reader emailed asking what I knew about him. The answer was “nothing,” but I did a little digging and found some impressive long-form journalism, primarily in Washington Post Magazine and a growing reputation as a short fiction writer centering mainly on his Pushcart prizewinning story “Everything Ravaged, Everything Burned.” We actually had a nice collection of Wells Tower links in the comments of that old post, but they were lost in the great Millions comment purge of 2006.In any case, in the ensuing five years, Tower has penned some of the decade’s most memorable pieces of immersion journalism, most notably “Bird-dogging the Bush vote: Undercover with Florida’s Republican shock troops” (sub. required) in Harpers, and his first collection of fiction has come out, anchored by the story that first got him noticed.About that title story: “EREB” is a workplace drama in the guise of a viking adventure tale.You could say that those people on Lindsfarne were fools, living out there on a tiny island without high cliffs or decent natural defenses, and so close to us and also the Swedes and the Norwegians, how we saw it, we couldn’t afford not to come by and sack every now and again.Though it wasn’t my favorite story in the collection, it’s not hard to see why people started wondering who Wells Tower was. Also impressively ambitious is “Leopard.” As I noted in my New Yorker fiction round up, “This one is told in the second person about (by?) an unpopular eleven-year-old boy. Tower gets into the boy’s head incredibly well – the perpetually wounded pride, the outlandish fantasies that punish those who have wronged him.”The other seven stories are somewhat more conventional – lots of wayward men, cheated on, cheating, put upon, falling apart – though no less entertaining. Their hangovers are “calamitous.” They spy on the hooker that lives across the street. Opening the collection, “The Brown Coast” begins “Bob Monroe woke up on his face. His jaw hurt and morning birds were yelling and there was real discomfort in his underpants.”But these fallen creatures aren’t meant to disgust or inspire pity. The prose is too raucous and the set pieces too inventive. And when they’re not about vikings or imaginary leopards, Tower’s stories may be the short fiction we’re used to, but delivered with the volume turned up.Bonus Link: Wells Tower’s Year in Reading

Reviews
Reviews
Reviews
Wootton’s notion of practical Aristoteilian-esque virtue in the face of limitless appetite is compelling, and he stakes his claims persuasively.
Reviews
Nicholas Cannariato | 2 books mentioned 5 min read
● ● ●
Reviews
Over and over, the text returns to this question: What function do philosophy and literature serve in the material world, where people suffer constantly and nature endures indifferently?
Reviews
John Dixon Mirisola | 2 books mentioned 1 6 min read