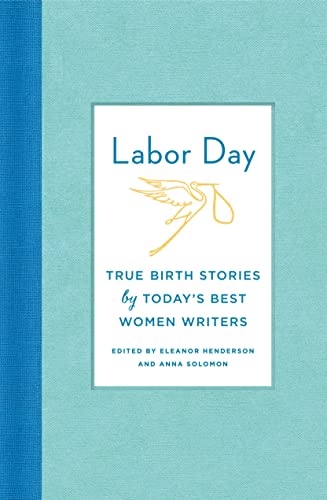 Two years ago, when I was expecting my first baby, I searched for an anthology of birth stories and was surprised to discover that none existed. I could find birth stories online on parenting websites and mommy blogs, I could stumble upon birth stories in memoirs and novels, and I could read stories of natural birth in Ina May Gaskin’s Spiritual Midwifery, but I couldn’t find what I really wanted, which was a book that was just birth stories without any advice or particular agenda attached.

Labor Day: True Birth Stories By Today’s Best Women Writers is the book I hoped to find, and the question of what took so long for it to appear is one that its editors, Eleanor Henderson and Anna Solomon, address in their introduction. They point out, first of all, that birth is now a big business, thanks to increasing options surrounding fertility, pregnancy, and labor:

A vast and diverse industry has grown up around birth in the United States, from “boutique” labor and delivery suites that offer mani/pedis and vaginal-rejuvenation therapies to “alternative” birthing centers that provide the chance to labor without drugs or medical intervention.

Henderson and Solomon also note popular culture’s current obsession with birth and pregnancy, from reality TV shows like A Baby Story to gossip magazines with arrows pointing to celebrity “baby bumps” to public hand-wringing over the length of Marissa Mayer’s maternity leave. Once a private conversation, pregnancy and birth are part of a public debate about women’s changing roles in the family and in the workplace:

…behind the world’s fascination with airbrushed bellies and dramatized labors, we sensed a more urgent narrative forming, a conversation about the choices available to mothers in the twenty-first century. We watched as “Why Women Still Can’t Have It All” became the most circulated article in the history of The Atlantic, as TIME magazine made “Are You Mom Enough?” a catchphrase, and as Mitt Romney unleashed binders of outraged women into the Twitterverse.

The essays in Labor Day reflect this anxious atmosphere, sometimes for comic effect and other times with earnest soul-searching. In her essay, “What To Expect When You’re Not Expecting,” novelist Marie Myung-Ok Lee sums up the politics of modern birth this way: “I was realizing that choosing one thing over another would be, basically, a referendum on what I believed, my earliest documented statement on parenting. Earth mother or high-tech urban mommy? Breast or bottle? Rooming in or nursery? Drugs or just say no?”

Lee’s words may sound overwrought, but I remember feeling the same pressure when my doctor asked me if I had any thoughts about my “birth plan,” a concept unique to this particular moment in women’s health. If Labor Day had existed when I was pregnant, I am honestly not sure if it would have helped me to answer my doctor’s question or left me feeling even more confused, but I’m certain I would have read every single one of these essays anyway. Most birth stories I know were delivered second-hand; they’re a little fuzzy around the edges, a little watered-down, and often simplified so as not to frighten. But there’s nothing watered-down about the stories in this volume: they are blunt, wistful, confessional, wise, loving, sorrowful, witty, and sometimes eerie. And then there’s the fact that novelists, poets, and memoirists are at the helm of these essays. These are women with a lot of storytelling tools at their disposal. Putting aside my personal connection to the material (if that is even possible), it was interesting to see how each contributor attacked what is basically an open-ended creative writing prompt: Tell the story of your birth. Tell the truth.

Contributors to Labor Day include The Millions’s own Edan Lepucki, as well as many writers discussed and interviewed in these pages: Dani Shapiro, Joanna Smith Rakoff, Lauren Groff, Lan Samantha Chang, Cheryl Strayed, and Heidi Julavits — to name just a few. These women offer a wide variety of birth experiences. There are home birth and hospital births and even a birth in a car. There are women who labor for hours and those whose labors come quickly, or one case “precipitously.” There are emergency surgeries and scheduled caesareans. There are transcendent births and disappointing ones.

Despite the diversity of experience, I sometimes felt like I was in an echo chamber. Many of the writers in this volume reside in Brooklyn or progressive Brooklyn-ish communities and as a result, have similar attitudes toward labor and delivery. These are women who believe in research, planning, and more often than not, a labor without medical intervention or painkillers. The ideal of natural birth hovers over these essays, a goal to strive and train for. Those who are able to go through with it are often (but not always) exultant. During her 43-hour labor, Cheryl Strayed was transported: “I was blown away and forever altered. Aware of physical capacities and spiritual realms I hadn’t known existed before.” For Rachel Jamison Webster, natural birth was empowering and even healing: “a knowledge of my own strength — and my mother’s and her mother’s — was born.” Eleanor Henderson, Gina Zucker, and Heidi Julavits all report a heady feeling of accomplishment after their unmedicated births. But Julavits also describes an existential dread with the birth of her second child, despite a successful natural delivery: “The first birth proved a challenging athletic event, but I didn’t have to press my face against the cold glass of self.”

For those who do not manage to give birth naturally, there is often regret after delivery. For Edan Lepucki, the disappointment runs deep because natural birth is not just a cultural ideal, but something that is valued in her family: “If the female body is built to give birth, and if every other woman in my family can give birth naturally, then why did I have to meet my baby with an oxygen mask over my face, half my body so numb it became not my own?” Dani Shapiro wryly invokes the natural birth ideal when her long labor becomes decidedly medicalized: “Pitocin. Epidural. Two things I’d been told to avoid at all costs by my granola-crunchy mommy friends who have urged birth plans and doulas and acupuncturists and evening primrose oil…” For many contributors, the labor is too long or the pain is too great or the situation is too dicey and so natural birth is ultimately abandoned, a negotiation Lauren Groff summarizes with her admission: “I had wanted a natural childbirth, but when the anesthesiologist came into the room with the epidural, I kissed his hands.”

Another ideal that shows up in many essays is that of the “birth plan.” This is a group of accomplished women, after all. They are accustomed to planning. Several of them finish big projects shortly before birth; others educate themselves on every aspect of the birthing process; others clean houses and bake — or at least plan to clean and bake. But then things that could not be anticipated begin to occur and the writers must adjust. A persistent theme throughout these essays is the difficulty of letting go of expectations. Gina Zucker observes that all her planning for birth was a bit like her planning for her wedding: “The details I’d obsessed about for months became beside the point afterward.” Marie Myung-Ok Lee calls labor a metaphor for life: “You can have your beliefs, your expectations, your plans, but when it comes, it just comes and does what it wants.” Ann Hood takes a rueful, novelistic view: “How we plan! And how hopeful and ignorant we are! With such certainty we move through life, making decisions — however impulsively — and moving steadily forward.”

Labor Day will no doubt be marketed to expectant mothers and touted as the perfect baby shower gift, but I think that it might be just as helpful, if not more helpful, to read these stories after birth. Before giving birth, I looked to birth stories as a way to prepare for the unknown, an idea that now strikes me as wishful thinking. But after giving birth, the stories I heard from other women helped me to make sense of what had just happened — and who I was after what just happened. It’s a process Claire Dederer describes in her essay, “Not Telling”:

The birth story, I believe, is not so much about the baby as about the mother and her wonder and horror at the whole crazing fucking incomprehensible transformative gestalt alteration she’s undergoing. The birth story is an expression of the dying throes of an egoism that is in the process of being brutally impaired.

The interesting thing about Dederer’s essay is that she doesn’t actually tell the story of the births of her children. She doesn’t tell them, because she’s told them before, in her memoir, Poser, and she regrets having told them, because the stories are no longer hers, they are now for her readers. “Maybe they helped someone else become a mother,” Dederer muses. I was fascinated to read these words, because Dederer’s birth stories are among the ones I stumbled upon, when I was looking for birth stories. Her stories stuck with me, and they helped me, and I’m glad that she is no longer so lonely in telling them.

Hannah Gersen is a staff writer for The Millions and the author of Home Field. Her short stories have appeared in The Southern Review, The Carolina Quarterly, and The Chattahoochee Review, among others. Read more at hannahgersen.com or sign up for her newsletter here.

Reviews
● ●
Reviews
Reviews
What follows are love affairs in hotel rooms, quiet suicides in basements, and monologues about being known for wearing goofy hats. What follows are stories that don’t begin and end in the same place, at least not emotionally. There are whole stories in what isn’t said.
Reviews
Luke Wiget | 2 books mentioned 5 min read
● ● ●
Reviews

Reviews
● ●
Reviews
Reviews
Atxaga’s grand curiosity never dulls or wavers—he becomes the frog introduced late to the boiling pot in which the rest of us obliviously sit.
Reviews
Julian Zabalbeascoa | 2 books mentioned 6 min read
● ● ●
Reviews
What is clear from reading these interviews is that, while the 20th century has not be kind to Iran, it has been particularly difficult for Iranian poets, writers, and intellectuals looking to articulate the problems of their homeland.
Reviews
Zach Pontz | 2 books mentioned 1 2 min read
● ●