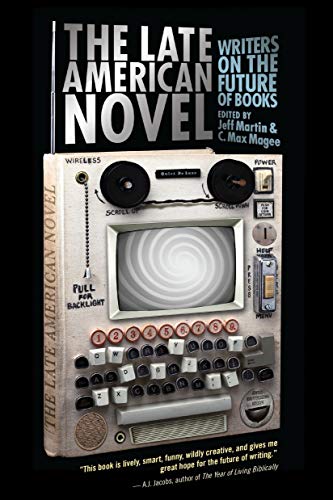 The following essay was co-written by me and Jeff Martin and is, in a slightly different form, the introduction to the collection of essays The Late American Novel: Writers on the Future of Books that we co-edited and that includes inventive, thoughtful, and funny pieces in which Jonathan Lethem, Rivka Galchen, Benjamin Kunkel, Joe Meno, Deb Olin Unferth, and many others consider the landscape as the literary world faces a revolution, a sudden change in the way we buy, produce, and read books. The book’s official release date is today, and if you are planning on ordering it from Amazon, today would be a great day to pull the trigger, as we’d like to see the sales rank number soar. Or, if you’re so inclined, today would also be a great day to head over to your local indie bookstore and pick up a copy (or lots of copies – this book makes a great gift!)

F. Scott Fitzgerald famously remarked, “There are no second acts in American lives.” While true in his specific case and dramatic in that Lost Generation sort of way, this statement has been proven wrong time and again. From Richard Nixon to John Travolta, American life is filled to the brim with second acts. Some lucky souls even manage a third, fourth, or even fifth (Cher, anyone?). But this phenomenon isn’t limited to we the living; it’s all around us. The LP was declared dead years ago, yet more and more bands are putting new material out on vinyl. The Baby Boomers are dusting off their old turntables and their grandkids are buying new ones. What’s out of fashion becomes retro, then goes vintage, and then comes back again. It all comes down to one word: reinvention. The word itself conjures up images as evocative of the stereotypical American dream as apple pie, Aaron Copland, or Chevrolet. In America, you can arrive a pauper and leave a prince, or at the very least own a home with a low interest rate and a TV that gets 300 channels. It’s been called the “Land of Opportunity” for quite some time, but a more apt and timely description would be the “Land of Reinvention.”

Our media consumption over the past century looks like a Darwinian chart, a rapid evolution from gears and cranks to miniaturized Space Age sleekness. In that short time we’ve gone from phonographs to iPods, from scratchy 16mm reels of film to the crystal clarity of Blu-ray discs. But in that time, one format has remained virtually unchanged until recently: the book. The written word’s last big format change turned out to be a pretty big deal, fomenting revolutions and laying the groundwork for civil society, the scientific revolution, and nothing less than modernity itself.

Gutenberg’s big coup sent shockwaves through palace halls across Europe (though, it should be noted, moveable type printing had been invented earlier in Asia) and soon reverberated around the globe. With the invention of the bound, printed, mass-produced book, medieval scribes found themselves left with an obsolete skill set. Latin and Greek faded as the linguae francae of the learned classes when printers sprang up and produced books in the local vernacular. Never before had shared knowledge been so accessible to so many. So alien and threatening to the established monopolies of knowledge, power, and morality were these insidious new devices that they set off a struggle that has raged on and on and on, from early sixteenth-century France, when King Francis I briefly made book printing a capitol offence—His Royal Highness reacting to the new technology’s facility for inciting religious schism—to the book banning brigades picketing your local library today.

The proliferation of printed books also led to developments like the standardized spelling of the words you’re reading right now— because who cared about spelling previously, when reading was a rarity?—and a greater awareness of the rules of grammar, which are nearly impossible to codify without a visual and intellectual understanding of language. The impact of the mechanical reproduction of books, though it did not register as lightning fast as the technological change of today, was nothing short of the remaking of civilization. And even as other media have followed the book and usurped its position at the center of cultural exchange, it still seems vital for us as a species to consider what a change in the essential form of the book might mean for our future.

Because into this heady mix has come something as new and potentially paradigm-shifting as those first German Bibles. With the advent of e-readers, near infinite data storage capability, and a shift to a more sustainable and digitized culture, a sea change is upon us. Will books survive? And in what form? Can you really say you’re reading a book without holding one in your hands? These and other similar questions are guiding the current and sometimes heated conversations going on in bookstores, universities, libraries and living room book clubs. It would be foolish to claim to know for certain what will happen to the traditional bound and printed book, but there’s no doubt that the road that lies ahead looks quite different than the one behind.

Over the past year and a half, we’ve had the great opportunity to work with and hear from some of today’s most promising literary voices. And as might be expected, there is no general consensus. Some have devised ingenious schemes and strategies, seeking to mark out future spaces in which books will survive and even thrive. Others expect future generations to encounter dystopian literary landscapes, where the merging of media and digital technology leaves books unrecognizable and somehow diminished in the eyes of readers. Some offer confident prognostications about literature’s future in this increasingly digital age. But one thing is certain, the conversation continues. And that is always a good thing.

In just under two weeks, Japanese publisher Shinchosha will be releasing Haruki Murakami’s new novel, 1Q84. The Millions broke the news about the new novel last October, when Murakami discussed it during a reading held at Zellerbach Auditorium in UC Berkeley. Now, with the release of the novel imminent, the Internet is crawling with speculation about what Murakami has in store for us.

Hard information about the new novel, however, is scarce. Murakami has described it as his most ambitious work to date and a “real doorstop.” All his fans know for sure, though, is the title, the release date (May 29), and the price, 1,890 yen for each of book’s two volumes (around 40 US dollars). All other details have been assiduously guarded by Murakami and his publisher. Why the secrecy? Citing reader complaints about leaked plot details during the run-up to Murakami’s 2002 novel Kafka on the Shore, the solicitous author has insisted that his fans be allowed to approach the new book with no preconceptions.

Some of Murakami’s fans, however, are not content to wait. Fans have already begun to post five star “reviews” (which have since been deleted) of the book sight unseen on Amazon’s Japanese site, and the secrecy surrounding the novel’s contents has created a heated debate in the Japanese blogosphere, leading amateur and professional book lovers alike to engage in fevered attempts to decrypt the book’s title. One popular theory claims the book is inspired by George Orwell’s dystopian classic Nineteen Eighty-Four (the number nine in Japanese is pronounced like the English letter Q, thus in Japanese 1984 and 1Q84 have the same pronunciation). Another finds inspiration for the title in the novella The True Story of Ah Q, by Chinese novelist Lu Xun, an early 20th century writer and intellectual.

The latter opinion has been fueled by the comments of a prominent Tokyo University professor Shozo Fujii, who argues that Lu Xun is one of Murakami’s primary influences. The 1 in the book’s title, he argues, should be read as the personal pronoun I. In other words, I am Q. What the 84 might stand for is unclear. Fujii’s analysis of Murakami’s work breaks with the commonly held view of Murakami’s influences, primarily Western writers and literary heavyweights like F. Scott Fitzgerald and Dostoyevsky (a view confirmed by Murakami himself). Nevertheless, Fujii’s theory about 1Q84‘s meaning has developed a large following online, and has been bolstered by his close readings of Chinese literary themes in Murakami’s early novels, Hear the Wind Sing and The Wind-Up Bird Chronicle.

Although there is no official publication date for the English translation (and no Japanese review copy coming our way, hint… hint…), check back here next month for information on reviews and commentary from the Japanese release.

Essays
Ben Dooley | 4 2 min read
● ● ●
Essays
In “William Wilson,” the most autobiographical of his tales, Poe may have been portraying his own unspeakable boarding school experience.
Essays
Catherine Baab-Muguira | 1 5 min read
● ● ●
Essays
The truth is, every published writer has been faced with summing themselves up in just a few sentences. It's not easy, and a bio isn't a fixed thing--or at least not until you're dead. Until then, it (hopefully) evolves with each new publication, each year lived. The decision of what to include and exclude persists throughout one's career.
Essays
Edan Lepucki | 37 5 min read
● ● ●
Essays
Of all the people I’ve known who tried to become writers, many have not become writers…most people don’t fail to become writers because they can’t become writers; rather, at some point, it becomes clear all the things you cannot be (or have or do) if you become a writer.
Essays
Sonya Chung | 27 7 min read
● ● ●

Essays
They mean to prepare the reader for what comes next, the story of the particular way in which time flowed over or through France these past 70 years.
Essays
Arthur Willemse | 8 min read
● ● ●
Essays
As easily as one dream is satisfied, another one appears.
Essays
Emma Straub | 20 6 min read
● ● ●
Essays
I emerge into daylight, my thoughts swimming as well as my sight. Everyone around me is stunned and exhausted.
Essays
Kathryn Ma | 1 9 min read
● ● ●
Essays
I’m a genius, I’ve been quietly telling myself for the past 13 years, and nobody even knows it.
Essays
Michael Bourne | 52 7 min read
● ● ●