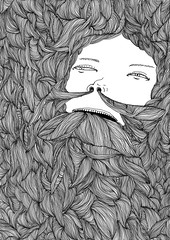 A common stereotype about art and mental health is that writing is catharsis – a way of healing old wounds, defeating childhood demons, processing the past and putting in its place. My thesis here is the opposite – that writing is a process of degrading one’s emotional state.

I’ve been working the last two years on my first novel, which has certain elements of autobiography to it, and in that time I can’t help but notice a certain decline in the indicators of good mental health. It’s not that I’ve turned into the tortured artist type, appearing in public looking like ten miles of bad example, nor was I a paragon of mental health to begin with. But compared to the years before I started the book, I have become moodier and more withdrawn, and most of the time I’m thinking about the book instead of connecting to the people around me.

About the same time I started to wonder where this extended case of the blues was coming from, two different people – a friend and my therapist – remarked that it must be good to be “working through” my childhood issues with this writing project. “Ha!” I thought. “If I want to work something out, I’ll write it down in my journal.” The common assumption that writing is cathartic just didn’t have the ring of truth when I tried to apply it my situation.

I think I’ve figured out why. First, let’s take for granted that novelists have to get in the minds of their characters in order to make their work feel as honest and real as possible – to imagine themselves thinking and feeling as their characters would. That involves a lot of sitting around wondering what it would be like to be disappointed with humanity, unable to take a joke or otherwise afflicted by the modernist tradition.

I can usually get in that mental space, kind of like I can always afford a plane ticket to visit home – a stretch, but not impossible. When I do have trouble, one technique I use is getting up out of my writing chair to make faces in the mirror or act out a scene. One time my wife came home and found me trying to squeeze underneath our bed so I could picture what one of my characters would be seeing when he goes to ground. “Oh good, you’re here,” I said when I recognized her shoes. “Now stand there and scream at me like a speed freak.” (She’s very supportive, but she has expressed an interest in knowing when the book will be done.)

It’s all just pretend, of course. In a way I’m turning around my therapist’s advice to “fake it till you make it.” He means that it helps to pretend you feel better until you are better. I’m no expert, but as I understand it, that advice is a pretty good short-hand description of how cognitive therapy works. If you can train yourself to think differently about troubling events, then you’ll start feeling differently about them. Habitually reminding yourself that a given trauma wasn’t the end of the world eventually takes the vinegar out of it. I happen to agree and in fact have benefited from that kind of therapy. “Fake it till you make it” has been a great way to write new data on the old hard drive.

In other words, while it’s true that creating interesting characters is just pretending, the theory of cognitive therapy is that pretending really matters. But the problem with faking my characters until I’ve made them real, is that interesting characters aren’t on a path to healing. They are responding to stress in very human and understandable – and usually not very healthy – ways. Who wants to read a story about a bunch of people who have already worked through all their issues? Just perfectly self-actualized protagonists and antagonists battling to see who is stronger? That’s like reading an arm wrestling contest.

The best characters are so far from “making it” that they are their own worst enemies, carrying inside themselves the seeds of their own destruction. (c.f. Aristotle’s Poetics.) So getting in the head of a tragic hero, or any kind of believable character in a conflict, is like deliberately decompensating – etching bad data over good, imprinting the cognitive processes with all the self-destructive habits that your therapist taught you to break. It’s faking it until you make a mess big enough to warrant a novel. In that way, writers become their own anti-therapists, using their powers for evil.

Now, if my wife reads this, she’s going to worry about me more than she already is, so I hasten to offer this antithesis: Novels have resolutions, which means characters get the opportunity to “work through” their issues at the end. And it’s not going to be very dramatic resolution unless, along with the seeds of their destruction, the characters are also carrying the seeds of their salvation.

After all, the tragic hero is heroic in some way, and not every drama ends in tragedy anyway. If characters are going to have a fighting chance against their demons – internal or external – writers have to save as much good data to the character’s hard drive (and their own?) as bad. If so, perhaps the novelist can reach the same katharsis that Aristotle says the audience should enjoy in the end.

Robert McGuire is a freelance writer and college writing instructor living in New Haven. He is working on his first novel. You can learn more about his work at www.awishinonehand.net.

Essays
Zambreno casts her mother as lead, mysterious beauty, with cigarette, Coach purse, floppy hat. If she’s present here in literature, it seems there is the potential of moving on.
Essays
Anne K. Yoder | 7 min read
● ● ●
Essays
A psychic wound can be its own healing agent, may itself contain a gift, and may offer a form of unexpected inspiration. Yet how to embrace this elusive not-damage within the wound?
Essays
Philip Graham | 4 9 min read
● ● ●
Essays
Shafrir, Lacey, and Nutting have written novels about women who just want out: of their love lives, their work lives, and the networks that startup culture has engineered to broker mergers between the two. Please, they are saying. Stop it. Leave us alone.
Essays
Crystal B. Lake | 1 6 min read
● ● ●
Essays

Essays
● ●
Essays Notable Articles
“The most significant kind of learning in virtually any field,” writes Stanford professor Elliot Eisner, “creates a desire to pursue learning in that field when one doesn’t have to.” This definition of learning -- of learning that is transformative, of learning that galvanizes our minds for a lifetime -- is what should be driving our discussions, instead of the current focus on more and more high-stakes tests, where standards are geared toward establishing uniformity of thought among students and where creativity and individuality are neither valued nor encouraged.
Essays Notable Articles
Alex Kalamaroff | 23 5 min read
● ● ●
Essays
I never see a 7-11 Big Bite and don't instinctively desire to eat it. I know that Heinz ketchup is unmistakable and precious. A new paperback purchased with crisp American dollars? That's bliss. A Stephen King book? That's Shangri-la.
Essays
Lydia Kiesling | 12 13 min read
● ● ●
Essays
Human stories mix, meander, and sputter in the understory of a larger life always proliferating above our heads, rooted sprawling under our feet.
Essays
Benjamin Murphy | 11 min read
● ● ●